Living Aboard a Boat
in The Tropics

Whilst living aboard a boat in hot climates brings its own problems, it is - from this sailor's viewpoint anyway - a whole lot better than living aboard in cold ones. Palm trees and pineapples beat polar bears and penguins every time...

Which is why at some stage in a yachtsman’s life, probably when holed-up in harbour on a wet and windy weekend, his thoughts may wander to more enticing surroundings.

In the UK, these musings normally take him south – France, Spain, Portugal, Cape St Vincent. Then what? Left or right? Mediterranean or Caribbean?

In which ever direction his thoughts take him, wall to wall sunshine will feature strongly.

But it’s dodgy stuff, sunshine, and demands our respect. It’s made up of three major components:

By the time the sun’s rays have reached the earth’s surface they have been partially absorbed and weakened by various constituents of the atmosphere and deflected by air molecules, dust particles and air pollution.

When the sun is high overhead its rays pass through the intervening atmosphere almost vertically. Consequently the light is more intense, having encountered less dust and fewer air molecules than it would if the sun were low on the horizon and its rays had had a longer, oblique passage through the atmosphere.

Towards the equator the sun progressively spends more time high overhead, cloud cover and air pollution are generally reduced, and thus in tropical regions our exposure to ultraviolet light is significantly increased. 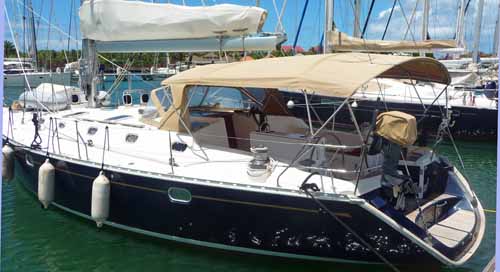 A large bimini which gives shade to the whole cockpit is essential when living aboard a boat in the tropics.

Pronounced with the emphasis on the first syllable, biminis – unlike bikinis, another fair weather image with which they may well be associated – prevent the cockpit occupants from getting too crispy when underway.

They vary a lot in size and complexity, from small ones that only protect the helmsman to substantial versions like the one shown here. They can be the very devil to design and construct, as this article describes... 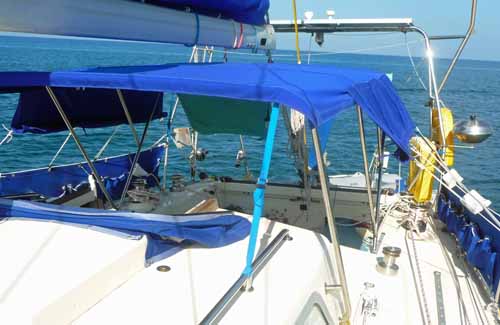 But for maximum protection from the sun when living aboard a boat at anchor, you can't beat a full deck awning like the one shown below.

A full deck awning will keep the sun off the deck and the interior cool when living aboard an anchored boat in the tropics.

These can be elaborate, custom made affairs that cover the entire deck, or simple boom tents. Clearly the full length version will keep the boat coolest, but it’s worth remembering that it may need to come down in a hurry, so many will opt for the simplicity of the boom tent.

In its most basic form, the boom tent version is nothing more complicated than a rectangle of fabric, eyeleted along its edges, slung over the boom and tied off to the guard rails.

If a mainsail stack-pack system with lazy jacks makes an over-the-boom version impractical, one solution is to sling it under the boom and support it with Velcro fastened straps around the boom; another is to fit a sail track to each side of the boom and slide the awning into it. This latter approach has much to recommend it as the awning is split into two more manageable halves.

Using awnings to keep the decks shaded from the sun goes a long way towards keeping the interior of the boat cool but for maximum comfort below, a through-flow of air is essential. And when at anchor, nothing performs better than a...

Along with windvane self-steering gears and non-skid table mats, a wind scoop will always find a berth on my boat. They’re fitted over a convenient deck hatch, normally made in rip-stop nylon, and supported by the inner forestay if you have one or a halyard you don’t. At anchor in hot, humid conditions a wind scoop will transform conditions below – unless there’s no wind to be scooped.

In non-tidal waters, an anchored boat will lay to the wind, so a forward facing wind scoop positioned over the fore hatch will pull a cooling breeze right through the boat.

Mary, a dab hand with a sewing machine, made ours from a single piece of spinnaker cloth. (click here to see how she made it) We can’t claim credit for the design, but it does work very well indeed. With a forehatch hinged at the forward edge as ours is, then in a rain shower the hatch can be left open up to around 30°. The droplets hit the fabric, run down it and drain away on deck. Very little rain, if any, is carried below.