Setting Out on our Sailboat
Live Aboard Lifestyle

It's 1100 hours on Sunday 8th July 2001, and time for Dick and I to leave Plymouth and set off on the first leg of our new sailboat live aboard lifestyle aboard our 38 foot (11'5m) yacht 'Alacazam'. 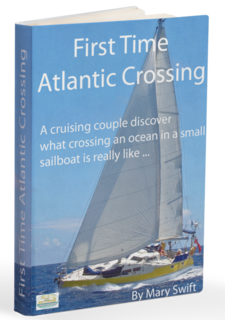 What mixed emotions we are feeling, a lump in the throat the size of an egg, tears welling up again, excitement at finally setting off after all the years of planning and an all pervading sadness at leaving family and friends behind.

A sizeable group of our friends, noticeable hung-over from the final 'goodbye' party the night before, gave us a cheer as we cast off from the Tamar River Sailing Club's pontoon.

Having motored down river, we turned into the wind and hoisted the mainsail. Yankee and staysail followed and we sailed swiftly out through 'the Bridges' with the wind nicely over the beam, on passage for Falmouth.

The first leg, Plymouth to Falmouth via Fowey

For the rest of our voyage west along the Cornish coast the wind was on the nose, so we decided to put in long tacks and stay out to sea where it was more comfortable. The weather was fair and the sailing good, although faster and more comfortable on the port tack due to the wave pattern. 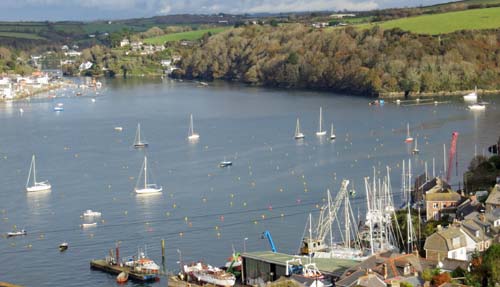 At about 1600 hours the wind died and we headed into Fowey for the night. We sailed in under foresail and tied up to a visitor's buoy. It was time for dinner, a glass (yes just a glass) of wine and an early night. The first night aboard on our new sailboat live aboard life.

We were up bright and early to set off for Falmouth but a heavy squall was just passing through so decided to have breakfast on the mooring first. Her Majesty's Harbour Master took the opportunity of relieving us of £14.50.

Before setting off we contacted the Harbour Master again for the latest weather forecast - Winds Westerly 2 to 3, flat sea state and occasional rain, similar to the day before. We hoisted the mainsail on the mooring and decided to put in a reef just in case there were more squalls about. A good decision, as when we cleared Fowey the wind had moved around to the South West, dead on the nose again and we tacked all the way to Falmouth.

The wind was gusting 4 to 5, the sea state was moderate and it rained the whole day and we experienced four more squalls. The sailing though was fabulous with the starboard tack proving to be the fastest and most comfortable today (8 to 9 knots). Although wet, we stayed in the cockpit for most of the voyage enjoying the sailing, my only disappointment not to see any wildlife, although a seagull tried to race with us for a while before giving up and flying off.

About halfway through the voyage the wind generator suddenly started to whine and scream at full pelt and was no longer charging the battery. Dick thought that the diodes must have blown as the in-line fuse appeared to be OK. There was nothing he could do until we reached Falmouth and so the wind-generator earned his new nickname of 'Mr Noisy'. 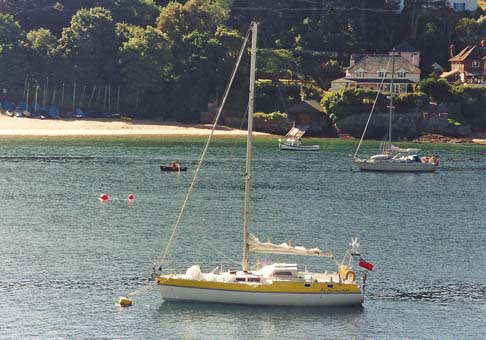 Alacazam on mooring in the Helford River, near Falmouth

The wind dropped to a force 3 and the new sailboat live aboard couple entered Falmouth Harbour at 1700 hours and successfully picked up a mooring, only to be told we had to move to a Visitors Buoy at the other end of Falmouth.

We were finally settled and phoned my dancing partner 'Murphy' who was just about to leave his Falmouth home with wife Pam to travel to Manchester, and would not be back until Saturday or Sunday. He very kindly offered us the use of his house whilst he was away, but I doubt we will take advantage of this very kind offer. We should also have left Falmouth before the weekend so we bade our farewells.

Dick tried again to make the 'WeatherFax' software programme work, but to no avail as he is experiencing the same problems as he did at Sutton Harbour (i.e. a very clear signal but no images on the laptop).

Dinner on board and another early night ready for our outing to the Eden Project tomorrow with our Plymouth pals, Anna and Phil. Am I looking forward to that!!

Next: The Sailboat Live Aboard Lifestyle Part 1

At Anchor and Ashore in Falmouth

Our next Passagemaking Leg: Crossing the English Channel