Just what anchor chain length should you deploy when dropping the hook? It's something you have to get right, as too little and your boat's likely to drag; too much and you run the risk of swinging into other anchored boats.

The primary factor in deciding the length of anchor chain to deploy is the depth of water you're about to anchor in. And of course, if you're in tidal waters, the range has to be taken into account.

For instance if you drop your hook in 3m (10ft) at low water springs in one of the UK's Bristol Channnel ports you'll find that 6 hours later you've got 18m (60ft) of water under your boat. Yes, that really is a 15m (50ft) range.

So if you didn't take the rise of tide into account when deciding on the anchor chain length to deploy, you'll now find yourself in a spot of bother.

Bristol Channel sailors have to deal with the second greatest tidal range in the world - only the Bay of Fundy in Canada can beat the Bristol Channel tides!

Conversely, in Caribbean waters - which can boast of nothing more than half a metre (2ft) or so - you can pretty much ignore tidal range in your anchor scope calculations.

Your electronic depth sounder displays the depth between the transducer and seabed, unless you've entered offsets such that it shows either the depth below the keel, or the full depth from the surface.

Is your depth sounder display giving you depth below transducer, keel or actual depth?

To this latter depth you'll need to add the height of the bow roller above the surface to get the effective depth. Why? Well, it's from the bow roller that you'll measure the length of anchor chain to be deployed.

What's Going On At The Anchor?

For the anchor to do what's expected of it, the pull exerted upon it by the chain must be horizontal as shown here.

Note that the blade part of the anchor is angled downwards, tending to pull the anchor deeper as load is applied to it.

However, as more load is applied, such that the chain is no longer lying flat, the shank of the anchor will rise clear of the seabed as shown here.

Eventually it will reach a point where the blades lose their tendency to 'dig in'.

Same anchor, now about to break-out through having insufficient anchor chain length deployed

The Critical Angle and Minimum Scope

The angle at which this point point is reached is known as the critical angle, which for most modern anchors is between 15 and 20 degrees.

Consequently, the minimum scope to lay out to avoid the critical angle being exceeded is [(effective depth)/sin 15] which is very close to 4 x the effective depth.

Hence Scope:Effective Depth = 4:1, which is the theoretical minimum ratio to avoid the anchor pulling out when the chain is pulled taut - but note the words 'theoretical' and 'minimum'.

If, having laid out the appropriate scope, another anchored vessel is within your swing circle - you're too close.

For most conditions 4:1 scope is fine, the chain will not be pulled tight and the boat will lie to its anchor like the one on the right in the pic below.

In this condition, the effect of any gusts will be absorbed by the catenary in the chain such that the load on the anchor won't be increased.

Which situation would you feel most relaxed about?

But in strong winds, the boat may take up a position as shown above, where the 4:1 ratio is only just adequate and there's no reserve catenary to absorb the effect of further gusts.

Now a gust will apply a shock load directly on the anchor, which is likely to drag at best or, at worst, break out completely. Clearly not a prospect that most of us would be comfortable with.

So what's to be done?

Here's what I do normally:

Deploy the 4:1 scope then attach a stretchy 10m snubber line with a chain hook to absorb the shock loads that would otherwise be applied to the anchor in wind gusts. 3 strand nylon rope is fine for this, but 8 strand multiplait is even better - and anything less than 10m is unlikely to provide enough stretch to be of much benefit. Those dinky little short ones that hang in a loop from the bow are of no use whatsoever.

Incidentally, if you don't have a chain hook, use a rolling hitch to attach the snubber to the chain. That way it won't fall off when the wind drops, as a chain hook tends to.

Here's what I recommend:

Lay out the 4:1 scope plus twice the boat length - providing of course there's room to do so, and you've got enough chain in your anchor locker.

Now you can rest easy in your bunk or make a trip ashore, confident in the knowledge that you've done the best you can for the security of your anchored boat.

For a boat 12m long overall with bow height of 1m above the waterline, the recommended anchor chain length to be deployed is...

Which is why on Alacazam (11.5m loa) we have a 20kg Rocna anchor, 70m of 10mm HT chain, and a further 30m of multiplait anchor warp ready to hank on to the end of the anchor chain if conditions demand - and an electric rope/chain windlass! 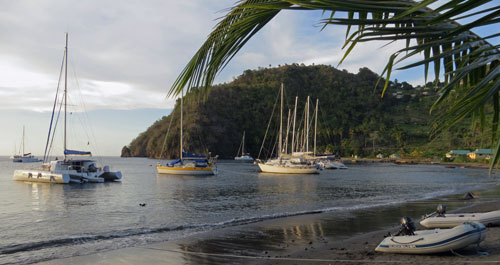 Here we've dropped the hook in around 30m (100ft) on around 70m (215ft) anchor chain length on a steeply shelving shore. But with the stern tied off to a palm tree ashore we're perfectly secure.

With the North-East Trade Winds blowing offshore there's no load at all on the anchor - its just keeping our bow in line.

In the unlikely event that this became a lee shore we'd still be fine, as the anchor would have to drag 'uphill'. And as the seabed slopes at more than 20 degrees, the critical angle at the anchor could never be reached.