Few sailing magazines fail to include stability data in the form of Gz curves in their new sailboat reviews, as it's probably the most revealing insight into the sailboats' resistance to capsize.

At least from static considerations that is; to get a complete understanding of the stability element of seaworthiness, dynamic stability must be taken into account too.

But back to the curve...

Just how does it reveal its secrets?

The key to it all is the boat's centre of gravity, its centre of buoyancy - and the changing distance between them as the boat heels to the wind.

What Gz Curves Tell Us about a Sailboat's Static Stability...

The Gz curve illustrates the relationship between the three key factors that determine the boat's static stability:~

The location of G is fixed, unlike B which changes as the boat heels and the immersed section changes shape.

As the Centre of Gravity and the Centre of Buoyancy initially move apart and then converge, so the length of Gz - the righting lever - increases and decreases.

This relationship between heel angle and righting moment governs the shape of the Gz curve and defines the boats static stability. 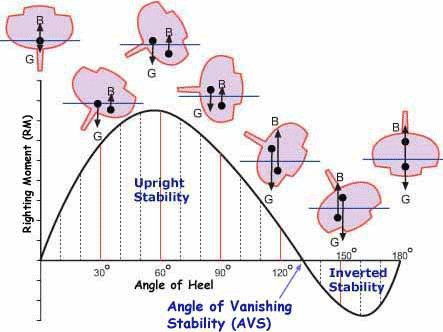 Upright Stability, the Angle of Vanishing Stability and the Inverted Stability

Thankfully it's not necessary to emulate the alarming sequence of events illustrated here to establish Gz curves; these are produced by calculation - these days probably via the designer's hull design software.

Our example shows a Gz curve for a typical monohull ballasted sailing yacht. Let's see what happens as the boat heels:~

With the boat upright, G is in the same vertical plane as the Centre of Buoyancy and there's no righting lever. But when the boat heels to the wind, B will move to leeward and a righting lever is generated.

This point is called the Angle of Vanishing Stability (AVS), also known as the Limit of Positive Stability (LPS), and in our sample Gz Curve occurs at 130°. Once heeled past AVS the Gz will become negative and will act as a capsizing lever rather than righting lever.

Unless affected by some outside force, the boat will continue to 180° of heel until the CG and CB are in the same vertical plane and the boat is stable again, albeit the wrong way up.

It's clear that hull form has a significant effect on stability. When heeling, wide, flat-bottomed hulls move the CB outboard more rapidly than narrower, 'slack bilged' hulls. In general then, the beamier the boat the greater the form stability.

Normally, the centre of gravity will be on the centreline in a properly trimmed boat, but it can be persuaded to move further from B to give a marked enhancement on the righting lever.

Racing skippers achieve this by demanding that under-employed crew sit out to windward. Many an hour have I spent thus as race crew on other people's sailboats, with the toerail cutting off the blood supply to my lower limbs, frozen to the core, and with only the prospect of a beer or two back in the Tamar River Sailing Club preventing my immediate mutiny.

In our boat, Alacazam, we can increase the righting moment when it's beneficial to do so by flooding seawater ballast tanks on the windward side.

For offshore yachts one of the most apparent and meaningful aspects of the curve is the AVS. However, because the force required to heel a heavy boat is more than that required to heel a lighter one, then clearly the boats mass (or displacement) is also a significant factor.

All else being equal then, heavy boats are inherently more stable than light ones.

It's worth mentioning that the oft-quoted ballast ratio can be misleading when considering stability.

This ratio is a measure of the percentage of a boat's displacement taken up by ballast. Although it can give some indication of how stiff or tender a sailboat may be, it takes no account of the location of the ballast or of the hull shape of the boat.

For instance, the bilge keeler below may well have the same ballast ratio as the club racer shown alongside it, but there's little doubt that the club racer will be the stiffer boat.