These days, my RDF set is probably in a museum somewhere and the sextant hasn't been out of its box in a number of years. It's still onboard though, together with a Walker towed log - just in case.

Cockpit instruments were independent units; the log measured speed and distance run, the depth sounder told you how much water was under your hull, and the masthead wind instrument showed you where the wind was coming from - and that, together with a magnetic compass, was just about it as far as sailboat instruments were concerned.

How things have changed...

There's no reason why you can't stick with a 'stand-alone' system of instrument systems if you prefer, but many of us go for the added benefits of integrated boat electronics where the wizardry of the marine manufacturers enable each of the instruments to 'talk' to the others.

The downside of an integrated instrument system is that if one unit fails, it may compromise the performance of another.

A typical basic integrated electronic instrument system for offshore cruising is shown above, the primary components being:

The magnetic compass remains an independent cockpit instrument, having been made redundant in the integrated system by data provided by the heading sensor.

Features of an Integrated Electronic System

Whilst each of the instruments in an integrated system can function individually, it's only when the sailboat instruments conspire together that additional functionality can be properly gained. For instance:

By hooking the radar set into the integrated system too, MARPA (Mini Automatic Radar Plotting Aid) collision avoidance function is available on the radar display, due to its interface with the heading sensor unit and the GPS.

All of the data available from the individual sailboat instruments can be displayed on a repeater instrument or the chart plotter.

Beware of Bugs in the System

A word of caution...

A log impellor seems to hold a special fascination for small marine crustaceans. They just love to set up home there, and immediately set to work on slowing it down.

Evicting the little blighters can only be done by removing the thru-hull unit, often a worrying process involving an impressive jet of seawater while you fumble around for the blank.

The temptation is to leave them in residence, ignoring the speed-through-the-water reading from the log and relying instead on the speed-over-the-ground from the GPS.

But now the chart plotter will interpret the disparity between the log reading and the GPS as an unfavourable current and display it at your boat's position accordingly. Similarly, the 'true' wind speed and direction won't be, and the displayed VMG to windward will be disappointing at best.

For a number of years, all Marine VHF Radios and top end Single Side Band (SSB) Radios have Digital Selective Calling (DSC) functionality built in, but the latest innovation is to incorporate Automatic Identification System (AIS) technology too.

By connecting an AIS enabled VHF (like the units shown here) to the chartplotter full AIS data can be displayed on screen.

DSC is just one of the sub-systems of the Global Marine Distress and Safety System (GMDSS) others of which include Satellite Communication, the Maritime Safety Information (MSI) system, the Electronic Position Indicating Radio Beacon (EPIRB) system and the Search & Rescue Transponder (SART) system.

Your Laptop, Tablet Computer or Smartphone Aboard

Providing you can pick up a phone signal or wifi you can, with the appropriate navigational software downloaded, use your device as a backup chartplotter.

Moored or at anchor, you may be able to hook up to a shoreside wifi network.

Sometimes you can find a free one, but more often than not you'll have to pay for it. If you see a cluster of cruising yachts anchored close inshore near a beach bar, you can probably safely assume there's free wifi - or cheap beer.

Often the wifi signal obtained in this way can be more than a tad disappointing, but it can be considerably improved by installing a signal enhancer... 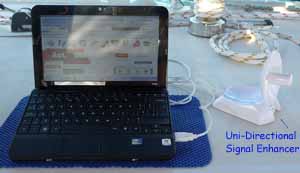 A uni-directional type will be fine when you're tied up alongside and know where the wifi transmitter is.

Just plug in the unit to a USB port on your laptop, point it at the transmitter and you're in business.

At anchor, with the yacht swinging around with wind and tide, you'll find the unidirectional type will be unreliable. 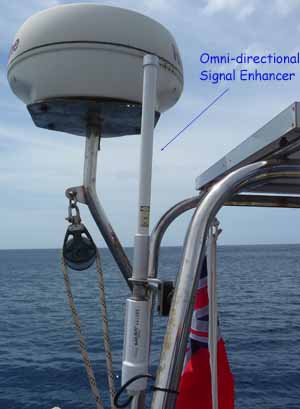 In this situation an externally mounted omni-directional type is far superior.

These take the form of an active antenna which is mounted (either permanently fixed, or hoisted on a halyard) as far above deck as is practicable.

When connected, you should be able to email all those attachments that you couldn't with SSB email - and you can now surf the internet.

To Invert or Not To Invert?

If you power your laptop through an inverter, it should be a pure sinewave type, or the performance of your computer may be compromised.

But as most laptops operate at around 19v DC it does seem strange to invert 12v DC to 220v (or 110v) AC and then via its own AC adapter to 19v DC. You can get around all this by using a suitable 12v Power Adapter, one end of which plugs into the 12v socket and the other to the power socket on the laptop.

An added bonus is that you'll no longer need an expensive pure sinewave inverter - a much cheaper modified sinewave model being fine for charging power tools and running the sewing machine.

Connecting to the Internet with a
Broadband Dongle 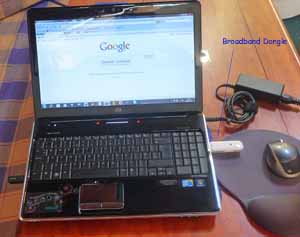 A broadband dongle is a USB stick that you plug into your computer to provide mobile access to the Internet.

The dongle contains a SIM card that gives you access to the 3G network that currently covers almost all of the UK and many other countries worldwide.

Most of the major mobile phone companies provide them, the monthly fee normally giving you up to 3Gb of data transfer. But, before using one of these outside of the UK you'll need to check if the service provider has coverage in the areas you intend to cruise - and how much it will cost.

If you hadn't done so beforehand, it's worth downloading the free Skype software and investing in a microphone headset, or a USB phone.

Communicating with Skype - Talk is Cheap

Skype is a program for telephone communication via the Internet. At best, call charges are free, as when talking to another person also on Skype. At worst, for example when calling a mobile or landline number, they're inexpensive....

Providing the person you wish to talk to has downloaded Skype to his computer and you're both on-line, you can talk free for as long as you like.

It makes no difference if he's in the house next door or on a yacht the other side of the world. You can also use Skype to contact someone on a mobile phone or landline, but for this there's a small charge - typically less than £1 ($1.50) for an hour long international call.

The components of the Skymate system are a small transceiver, a whip aerial and a connection to your own computer running Skymate software - and that's it!

It uses the ORBCOMM satellite network which consists of thirty satellites in low earth orbit (800km) constantly criss-crossing the globe.

One of these satellites picks up your transmission and re-transmits it to one of twelve Gateway Earth Stations (GES). From the GES, the data is routed Gateway Control Centre (GCC) which performs message switching and system monitoring before passing the message on for final delivery by internet.

Like all satellite systems, it's not free. There's a one-time activation fee of around US$100 plus a scale of monthly charges.

Skymate is very economical with DC power, using only 60mA on standby and 2.5Ah during transmission.

Next: Boat Electronics, the Chart Plotter