A Marine EPIRB for Sea
Safety and Survival

If you find yourself in dire straits in mid-ocean, a marine EPIRP can be a big help in getting you out of it. Used incorrectly though, one of these electronic devices can have the opposite effect, as this cautionary tale relates...

Some years ago were having a lunchtime beer in the yacht club bar with some pals, having taken a break from working on our boats.

We were building our wood-epoxy cutter Alacazam for long distance cruising and they were fitting out their Rival 38 for an Atlantic crossing. The topic of sea safety and survival arose...

One of their recent purchases, they told us, was an EPIRB.

I remember we were having to speak very loudly to make ourselves heard over the clatter of a helicopter hovering nearby.

We thought nothing of it at the time - after all this was Holes Bay in Poole Harbour, close to the home of the Royal Marines who were frequently charging around in choppers and fast landing craft - so we weren't too surprised by the presence of the helicopter.

But later that day our pals had a visit from Her Majesty's Coastguard...

"What, exactly, was the nature of your distress?" asked the Coastguard Officer.

The EPIRB beacon, still in one of the holdalls they had unpacked from their car and heaved aboard, had activated as a result of the rough treatment; hence the helicopter...

Protestations of innocence fell on deaf ears. The Coastguard Officer firmly but courteously explained that they could find themselves on the wrong end of a large fine - and confiscated their EPIRB to boot!

What Is A Marine EPIRB & How Does It Work?

The EPIRB system, or Electronic Position Indicating Radio Beacon system to give it its full name, is a sub-system of the Global Maritime Distress and Safety System (GMDSS).

There are two types of beacons:~

These are linked to a specific vessel, allowing rescue agencies to look up its emergency information in a database.

When your EPIRB transmits, rescuers know who you are and can phone your emergency contacts to verify your itinerary.

These aren't just for marine use but can be used by hikers, kayakers, backpackers, climbers, pilots, river rafters and hunters as well as boaters.

A PLB is great insurance while exploring away from the mothership in your dinghy, and is a less-bulky EPIRB alternative for any small boat.

The Marine EPIRB System in Operation... 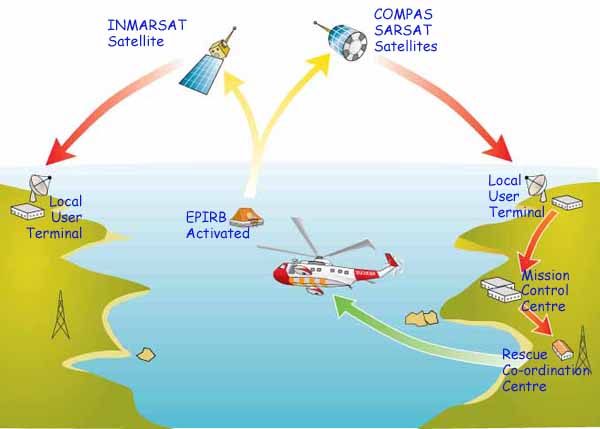 The communication channels of the marine EPIRB system

As so patently brought home to our chums, the EPIRB is used to alert search and rescue services in the event of an emergency. It does this by transmitting a coded message on the 406MHz distress frequency, which is relayed via satellite and earth stations to the nearest rescue coordination centre.

Marine EPIRBs work with the COSPAS-SARSAT polar orbiting satellite network which provides true global coverage, and can determine the casualty's position by triangulation to within 3Nm - or just a few metres if fitted with a built-in GPS (Global Positioning System). Most units also have a secondary distress transmitter, which operates on the old 121.5MHz and is used for homing purposes.

When an EPIRB is first purchased it must be registered with HM Coastguard, who will create a unique 15-digit hexadecimal beacon identification code - the HEX ID - which records:~

The distress message transmitted by the EPIRB contains information such as:~

Marine EPIRBS are radio transmitters, and as such must be included on your radio license.