The Catamaran vs Monohull Argument

If there was ever an argument that could never be won it's the Catamaran vs Monohull argument.

If you're a cruising sailor you're either a catamaran man or a monohull man and no amount of rational discussion is ever going to get you to change your allegiance.

But there some indisputable facts to be recognized when comparing catamarans with monohulls.

A glance at the illustrations below will immediately demonstrate that the accommodation in a monohull falls far short of that available in a similarly sized catamaran.

A typical accommodation layout in a cruising monohull of around 40 feet (12m) on deck. 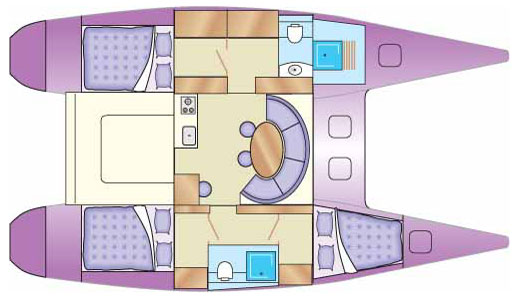 Additional living space created between the hulls in a similar sized cruising catamaran.

On the downside, the twin hulls of a catamaran are considerably narrower than that of a monohull and can be claustrophobic - you'll not get the walkaround queen-sized double beds that you'll find in today's monohulls.

However, not only is the overall accommodation below deck more spacious in the catamaran, the cockpit is more spacious too - and with the cockpit and the saloon sole being on the same level, there are no companionway steps to negotiate.

If the greater level of accommodation offered by a catamaran was the deciding factor then few people would be sailing monohulls. Of course, that isn't so...

As a result of their light displacement and associated small wetted area catamarans are faster than monohulls on most points of sail. Hard on the wind though, they're at a disadvantage. Their high windage and absence of a proper keel results in greater leeway than a monohull would make, resulting in a poorer VMG (velocity made good) to windward.

However a modern cruising catamaran fitted with daggerboards, as on the Catana 47 shown below, will go a long way towards negating this deficiency.

A downside of daggerboards is that they can rattle in their housings, contributing to the general noise level of a cat slamming to windward. And slam they do, particularly those with a low bridgedeck between the hulls. 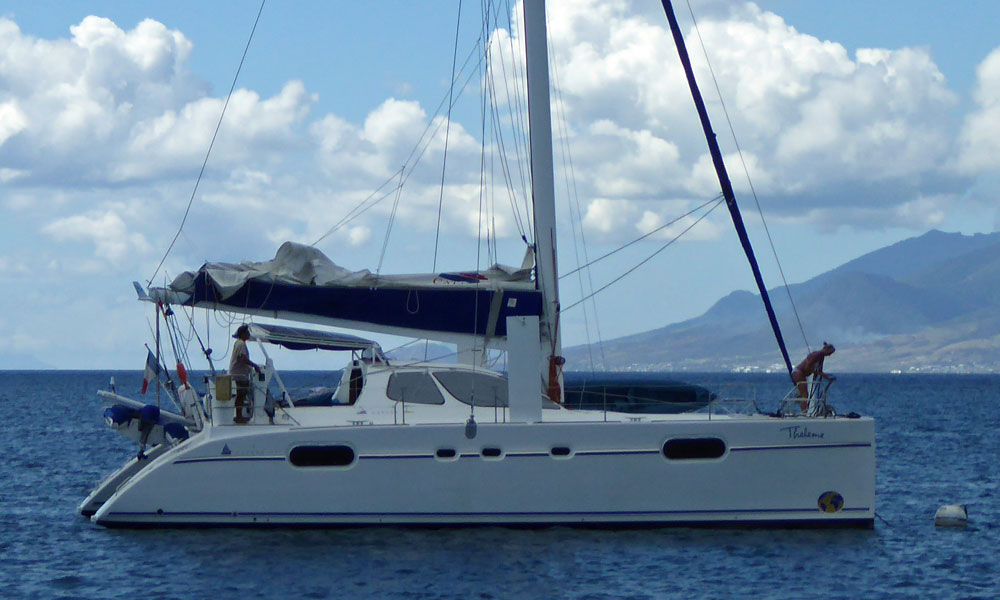 The centreboards on this Catana 47 are in the raised position

The lack of rolling and heeling is lauded by many as the primary benefit of the catamaran over the multihull - particularly so in a rolly anchorage where life aboard a catamaran is far more agreeable. Things tend to stay where they're put rather than sliding off the moment you take your eyes off them, and crew can wander around without moving from handhold to handhold.

Underway the motion of a cat is quite unlike that of a monohull, being a peculiar jerking affair which takes some getting used to.

Whilst the initial stability of a catamaran is higher than that of a monohull, once a catamaran reaches around 65 degrees or so of heel (the Angle of Vanishing Stability) it is likely to keep on going - and capsize completely.

On a properly ballasted monohull full capsize is unlikely to occur until it has heeled well past 100 degrees. Capsized, a monohull is in unstable equilibrium - it will either take on water and sink, or quickly self-right due to the motion of the sea.

But a capsized catamaran is in stable equilibrium - it will stay the wrongside up, but it's much less likely to sink. Inverted, it becomes a raft which is why you'll often find escape hatches in their hulls.

The lower initial stability of a monohull can be seen as a safety feature in a sudden gust of wind. The boat will heel and the sails will spill the wind, but that won't happen in a catamaran - the crew will need to ease the sails in a hurry.

But there's no denying that moving around on a flat cat is safer the on a heeled mono. 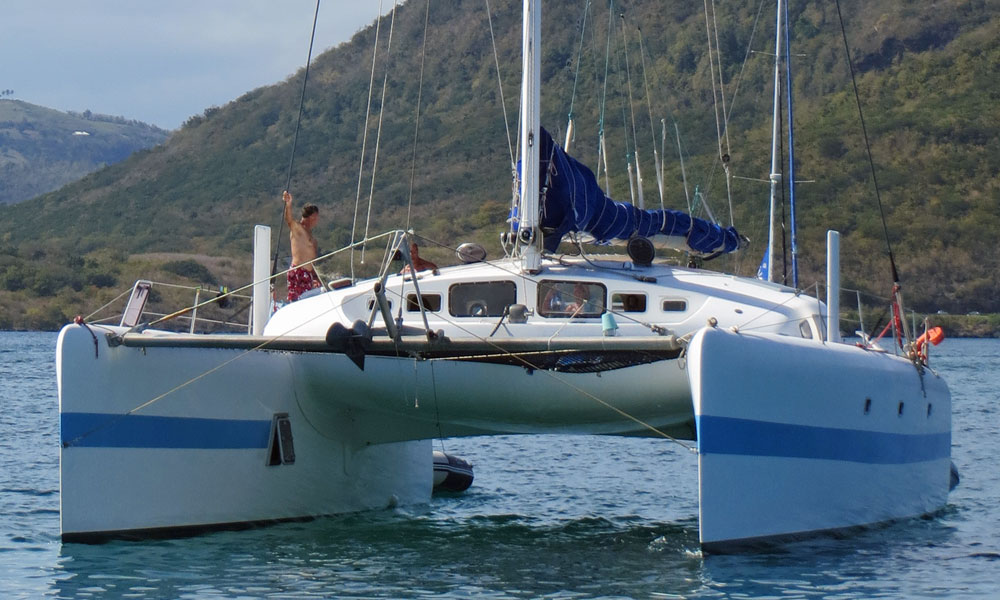 The escape hatch on this cruising catamaran is partially open - it would be securely closed when underway!

As you may expect, the two hulls and accommodation pod of a catamaran mean that its purchase price is considerably more than that of a monohull of similar length overall.

With two engines to look after, and a doubling up of many other items, maintenance costs are higher too.

And berthing costs? In a marina expect to pay double what you'd pay for a monohull of similar length overall.

Lifting out for storage ashore can be an issue too, as not all boatyards have a travel hoist capable of accommodating a catamaran.

But it's true that cats are currently commanding a higher resale value than monohulls, owing to their increasing popularity.

The catamarans' high windage will work against her in close quarter manoeuvering, but her twin engines will allow a competent helmsman to deal with this easily - even turning her in her own length is possible.

To approach anything like the manoeuvrability of a catamaran, a monohull will need a bow-thruster.

Under sail, the catamaran will take longer to tack through the wind than a monohull.

So that's the catamaran vs monohull argument as I see it. I've tried not to show my bias, which is something I'm not always good at.

But have I missed anything? Your comments would be welcome.