Is Dacron Sail Cloth the Best Fabric for Cruising Sails?

Polyester fibre, often known by its trade name Dacron sail cloth, is the most common fibre used for woven sailcloth. Its properties include good UV, fatigue and abrasion resistance, and it is comparatively inexpensive.

Woven sailcloth fabric is produced by weaving fibres one over the other in a loom, and is a significantly less expensive material than laminated fabric, which is made by gluing together alternate layers of plastic film and reinforcing grids of synthetic fibres.

Apart from its shape, two primary factors influence the performance of a woven sail ? the modulus of the fibres, and the closeness of the weave.

The modulus, derived from Young’s Modulus of Elasticity, is a measure of the fibre’s resistance to stretch – high modulus being less stretchy.

For us cruising sailors the desire for good sail performance will be tempered by the sail’s initial cost and longevity in use, which is why most of us still opt for Dacron sail cloth.

Not for us then, are the high-end, very low stretch and very expensive aramid fibres (such as Kevlar and Twaron for example) which are often inferior to polyester fibres when it comes to ultra-violet (UV) degradation, fatigue and abrasion resistance.

Qualities of Other Types of Woven Sailcloth

Other woven fabrics used in cruising sails include the following High Modulus Poly-Ethylene (HMPE) fibres, which are similarly identified by their trade names Spectra and Dyneema.

They’re all more expensive to produce than polyester fibres, which is why Dacron Sail Cloth remains good value choice of sailmaking fabric for standard cruising sails. But should we pay more and get better performance from our cruising sails? 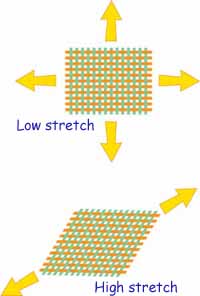 The Warp and the Weft in Woven Dacron Sail Cloth

As with all woven fabrics, sailcloth is made up of yarns perpendicular to each other. Those running across the loom being the ‘weft’ – or ‘fill’ in the United States – and those longitudinal to it, the ‘warp’.

Most woven fabrics are weft orientated as it’s easier to control the tension in this short direction across the width of the loom.

Consequently, woven sailcloth generally – but not always – has greater stretch resistance across the width of the roll, and less along its length.

When stressed diagonally across both warp and weft – on the ‘bias’ as it’s known – woven fabrics have least resistance and deform easily. 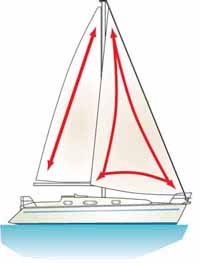 Stress areas in mainsails and foresails

Sailmakers therefore contrive to arrange the fabric panels such that the warp or weft (depending on the orientation) aligns with the tensile force in the sail.

The sketch indicates approximately where these are to be found in headsails and mainsails.

In the headsail, tension is applied to the luff by the halyard and in approximately equal amounts to the foot and the leech by the sheet.

The most highly tensioned part of the mainsail is the leech, applied by the mainsheet and at its maximum when hard on the wind.