Can Spinnaker Sails be The Cruisers' Friends?

Racing skippers hoist their spinnaker sails at the first opportunity in wind strengths that would have me thinking about putting the second reef in. OK, they're normally fully crewed and we on Alacazam are usually just the two of us, but even so...

We cruising types aren't looking to get to our destination before anyone else, but just to sail reasonably quickly, efficiently and in some comfort.

But sailing dead downwind in light airs, nothing beats one of the conventional types of spinnaker. Much less stressful though, and almost as quick, is to bear up a little until the wind's not less than 20 degrees off the stern, and use an 'asymmetric' or 'cruising spinnaker'.

The Difference Between Asymmetrics and Conventional Spinnakers

One difference is the spinnaker pole; conventional spinnakers have them and asymmetric spinnakers don't. It's the pole that enables conventional 'symmetric' spinnakers to be squared off and set directly across the airflow, enabling them to pull the boat directly downwind.

In the absence of a pole, asymmetric spinnaker sails have a tackline (rather than the 'guy' of a conventional spinnaker) which is lead back to the cockpit through a block at the stemhead. This means that the sail can be set to one side of the boat or the other, but not equally either side of the boats centreline.

Consequently the luff and leech are different lengths on an asymmetric - the luff being the longer - which is why they're, er, asymmetric.

Finally, the asymmetric has about 25% less area than conventional spinnaker sails, but still about twice the size of a 150% genoa. 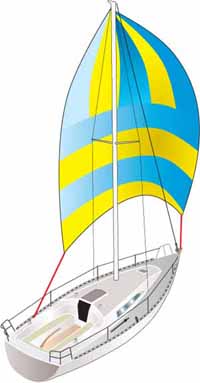 This is what you need when the wind moves further aft and the lightweight genoa collapses, but you should never be tempted to fly it on its own as shown here. Without being able to use a full main to blanket it, you'll have the devil of a job to get it down.

Hoisted on the spinnaker halyard and controlled by a sheet lead through a block on the quarter, spinnaker-like performance can be had on all points of sail from a close-reach to a broad reach without any of the trauma.

When close-reaching, the adjustable tack line is pulled down, tightening the luff and encouraging the sail to act more like a genoa. They're at the operating limit when the wind is on the quarter - any further aft and they'll be blanketed by the main and will collapse.

It's very likely that the foredeck layout, and particularly the pulpit, won't have been designed with one of these sails in mind. There'll probably be nowhere ahead of the forestay you can attach a tackline block to - and if there is, the tackline will chafe against the pulpit or the bow anchor. 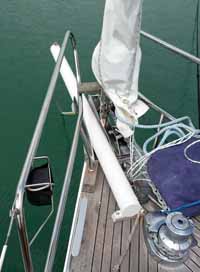 All of these problems would be solved by a short bowsprit.

At least one spar manufacturer has recognized this and has produced a very neat device that's attached to a ring on the foredeck and is restrained by a collar fixed to the stemhead fitting.

And as it's removable you won't get charged for it in marinas.

Set further forward the sail will be operating in clearer air, and will be more efficient as a result.

There are three designs for asymmetric and conventional spinnaker sails; all have radially cut heads, and each has a slightly different application:

Starcut: a slightly flatter cut than the next two, and optimized for reaching.

Tri-radial: probably the best allrounder for most of us, easily trimmed and with an operating range of 70° to 160° of the wind.

Unlike their asymmetric brothers, which are tacked to the centerline, the tack of a conventional spinnaker is attached to the end of a pole which can be squared-off to the wind. Now operating in clear air, unaffected by the mainsail, this sail will propel you dead downwind. 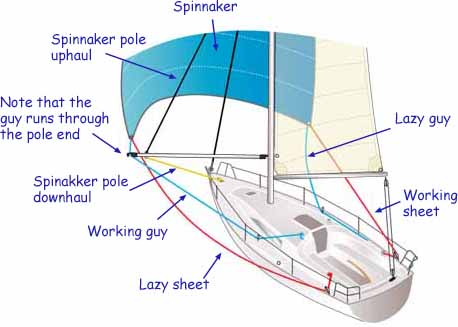 How to rig a conventional spinnaker

This performance benefit comes at the cost of complexity. Positioning the end of the pole at the correct position in space requires three control lines - a guy, a pole uphaul and a downhaul.

The clew is controlled by a sheet lead through a block on the quarter. In gusty conditions - where this sail's reputation for being unmanageable is usually gained - rapid adjustment to sheet and guy is required.

If allowed to get out of control, heavy rolling can develop leading in all probability to a broach. A broach to leeward is no fun, but a windward broach (putting the spinnaker pole into the water and causing a crash gybe of the boom and mainsail) can have very serious consequences indeed.

Many cruising sailors view all of this with a deal of trepidation, but others - often those used to inshore racing around the cans - gleefully drag out the spinnaker bag whenever the wind gets aft of the beam.

Snuffers, or Socks, for Spinnaker Sails

Anatomy of a spinnaker snuffer or sock

Whilst racing crews will launch their spinnaker sails ('throw the kite up', as they may nonchalantly remark) directly from the spinnaker bag and subsequently wrestle it to the deck at the leeward mark, we cruisers should give a collective vote of the thanks for the existence of the spinnaker snuffer.

Very much along the lines of a bottomless plastic bucket at the lower end of a canvas sock the whole shebang is operated from the foredeck by an endless rope.

Hoist the sail to its full height in the snuffer. Secure the tack line, then ease the sock line and trim the sheet. The snuffer will lift to the head as the sail fills.

Ease the sheet and haul on the snuffer line. Once the sail is secure in its snuffer it can be lowered to the deck.