Learn To Control The Mainsail Properly - and Live Longer...

The mainsail is the principal sail on a sailboat and is set on the after side of the mainmast. Together with the jib (and the staysail if we have a cutter) it creates the lift which drives our sailboats to windward.

And little affects our sailboats' handling characteristics than a poorly trimmed main sail.

An over-sheeted mainsail will get you excessive heel, a tendency to gripe up and a heavy helm that wants to pull your arms off.

Ease the mainsheet a little and normality will be restored. Rather important then, the mainsail, as without one set our boats won't sail well to windward and will be slow and unbalanced on the helm.

The main sail is a powerful beast and needs to be kept under control, and we have a number of mainsail control lines to do that...

Fractionally rigged sailboats with bendy masts and backstay adjusters can use this device - which may be hydraulic or a multi-part tackle - to increase the bend in the mast to flatten and de-power the sail in strong winds.

A further device found on racing boats, but one that cruising boats would benefit from, is the Cunningham. This is a small cringle in the luff placed about 150mm (6") up from the tack, through which a line is reeved, much in the way of a reefing point.

Rather than using the halyard to tension the luff by applying an upward force, the Cunningham line is used to do the same thing more affectively by pulling the mainsail downwards.

Sail Battens and the Roach 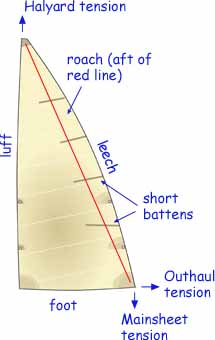 The roach is the area of the sail aft of a line between the head and the clew. It provides a useful increase in sail area, but it comes at a price - battens.

Without the battens, no amount of tweaking the mainsheet, outhaul or halyard would prevent it from flopping about creating nothing but drag.

The battens - strips of fibreglass or wood contained in batten pockets - support the roach, enabling it to provide additional drive. Short battens bend and crease the sail at the forward end of the pocket creating chafe and wearing out the sailcloth at that point.

On a battened main sail this is almost always the first part of the sail that will need repair. Long battens, extending from the luff to the leech solve this particular problem, but create a few new ones...

These first became popular on racing multihulls, primarily to support the large roach that the absence of a central backstay allowed them to carry. Other benefits of more interest to cruisers are:~

On the downside, there's obviously more weight aloft and an increased risk of chafe where the battens rub against the rigging when sailing off the wind. To take up the desired shape, the battens are forced into compression by adjustment at the leech-end pocket.

Without substantial sockets and specially designed slides, the resultant pressure on the mast would make it impossible to hoist or lower these sails. Some very slick systems are available, involving an external mast track and ball-bearing cars.

You may think that a much less sophisticated halfway-house system would be more suitable for an offshore cruising yacht. Here, only the top two battens are full length, preserving the sail shape where it's most needed.

Or No Battens at all?

Having put a few sea miles into your smart new main sail, it's odds on that the first area requiring maintenance will be the batten pockets.

For some skippers who are prepared to accept a reduced sail area, this vulnerability is a compelling reason for managing without them. Battens exist to support the leech, but if the leech is slightly hollow it will support itself and battens become redundant.

Such a sail will outlast and need a lot less maintenance that a battened mainsail, but in light to moderate winds will be considerably less powerful than a battened version.

A variation on this theme, as used by a pal of mine, is to have the sail cut with a conservative roach at the head of the sail supported by two full battens and a hollow leech below with no battens. It works for him.

A necessity with in-mast furling systems and an impossibility with in-boom systems, there's much to be said for loose-footed mains in conjunction with slab reefing and lazy jacks.

On the downside for cruising sailors though, a loose-footed main can't be used for collecting rainwater.

If your mainsail doesn't have an in-boom or in-mast furling system, but relies instead on a slab reefing system and lazy jacks, here's how to hoist it:~ 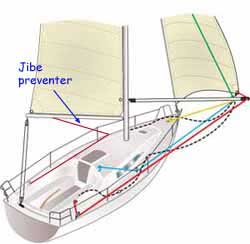 When running wing-and-wing, rigging a jibe preventer is a very good idea...

Many, if not most, accidents aboard sailboats occur when the boom sweeps across the cockpit in an uncontrolled jibe.

These then are to be avoided at all costs, with most cruising sailors choosing to rig a jibe preventer when running downwind.

Here's how we do it on Alacazam:~ 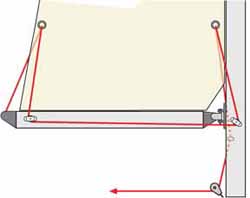 On fractionally rigged sailboats, the first sail you'll need to reef will be the main.

Exactly how you go about this will depend on whether you've got an in-boom or in-mast reefing/furling system or a straightforward slab reefing system with lazy jacks.

Here's how to jiffy reef the mainsail....