Marine battery charging is a subject close to the hearts of most cruising sailors. Get it wrong and you're risking serious damage to your battery banks. Get it right and your boat's 12 volt electrical systems will perform tirelessly.

Today's high revving marine diesels don't come equipped with starting handles; they can only be started by a hefty slug of juice from the starter battery.

And most of us equip our sailboats with a plethora of 12 volt systems and equipment; chart plotters, GPS units, VHF and SSB radios, autopilots, pressurised water systems, electric anchor windlasses, laptop computers, stereo systems and so on.

All that power has to be provided by the domestic battery bank, which we expect to delivery it 'on demand' and without fail.

And so it will, providing it's of sufficient capacity - and is backed up by a marine battery charging regime capable of restoring it to full charge.

Production sailboats 'straight out of the box' rely solely on shore power and engine charging to top up their batteries. Fine for the coastal sailor, but unlikely to be so for offshore mariners. Before we enter the fascinating world of alternative energy systems - green power - let's take a look at engine driven alternators.

Let's assume that we fitted two 200Ah lead acid deep cycle batteries to satisfy our daily 12 volt current draw of 325A, as set out in the table below... 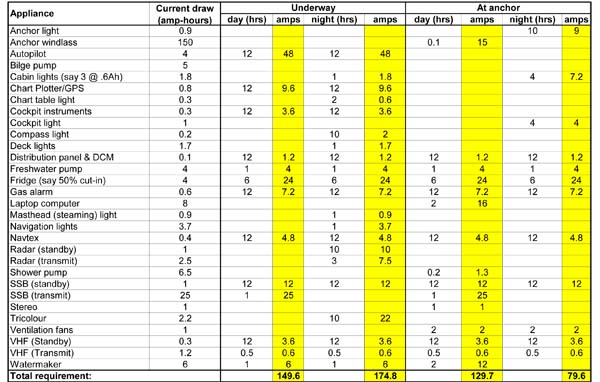 Click Here for a Live, Customizable Version of this Spreadsheet!

A rule-of-thumb is that the alternator output current should be at around 30% of the battery bank capacity - so we need a 120A alternator. Odds are that the one supplied with your engine will be rated considerably lower and will come with a standard automobile-type regulator built in.

If we're going to stand any chance at all of fully charging that battery bank we need a 120A alternator and a 'smart' regulator to replace the more cerebrally challenged one. What's that all about then?

Well ..... perhaps we're being a little unkind to the automobile-type regulator. After all it doesn't need a sparkling intellect to do its job. In just starting the engine, car batteries are rarely depleted below 5% of their maximum capacity, whereupon they are quickly restored to full charge by the alternator.

As we've already seen, sailboat batteries are often heavily discharged and need more than a quick squirt of amps to bring them back to full charge. The regulator controls alternator output by monitoring the level of charge in the battery.

At 50% discharge a battery will gratefully suck in everything that is thrown at it, but as the charge level rises the regulator will sense, and have to compensate for, an electrical 'back-pressure' from the batteries, preventing the charge from penetrating the cell matrix.

At a charge level of around 70% this all gets a bit much for the car-type regulator, which shrugs its shoulders and gives up. What has actually happened is that charge has built up on the surfaces of the plates resulting in an apparently high battery voltage which fools the regulator into thinking it's done its job.

At this point a cerebrally superior, multi micro-chipped regulator will sense that all is not as it appears, and begin cycling the charging voltage either side of the battery gassing voltage to allow full current diffusion throughout the full depth of the battery plates.

The relationship between battery input and alternator output is continually monitored whilst the engine is running, providing a continual restoration of battery charge.

The Balmar unit shown here is a latest-generation 'smart' voltage regulator featuring an easier-to-use programming interface and a new, faster processor that can respond more quickly to ensure that your batteries will charge more effectively and last longer.

With an efficient marine battery charging system, we can now take at stab at the charging interval and periods. The following comes with a heath warning, as it's an approximate calculation:

These means that you'd have to run your engines twice a day for two hours to keep the batteries topped up when under way - not a joyful prospect. Let's take a look at it at anchor:

At anchor then, you'd need to run you engine once a day for two hours or more - which may not impress your neighbours. But if you incorporated alternative energy systems - green power - into your charging regime, then your use of the engine would reduce dramatically.

It seems appropriate for a sailor to run his engine only when it's absolutely necessary, not just to maintain our superiority over power boaters (OK, just from an environmental viewpoint then) but also to retain for better use the pennies that are increasingly gobbled up by the ever-rising cost of fuel.

And there's something very satisfying about using nature's free resources rather than her limited and messy hydrocarbon deposits to pursue our sailing endeavours.

I've already waxed long and lyrical about windvane self-steering - unapologetically so - and I'm now about to do the same with wind and solar powered generating devices.

Effect of Solar and Wind Energy on
Marine Battery Charging

Here, as I bang away on the laptop at anchor in Falmouth Harbour, Antigua, Alacazam's solar panels are currently producing around 8A and the wind generator is producing around 5A in the steady 12 knot trade winds.

My average power consumption at anchor is around 130Ah - so I hardly ever need to run the engine to charge the AGM batteries. But let's see how the charge periods in the example above would be affected by the addition of a solar and wind system similar to Alacazam's.

Over a day the solar panels produce around 60Ah and the wind generator around 100Ah, in total let's say 150Ah, and assume that we can find this both at anchor and underway.

In our example then, the daily underway drawdown to be made up by the alternator is reduced from 306Ah to 156Ah and at anchor from 212Ah to 62Ah.

Running through the calculations again indicates that underway we'd have to run the engine every 31 hours for 1 hour, and at anchor every 3 days for 1 hour.

Now that's more like it - marine battery charging at its best!

Next: Marine Battery Charging with a Wind Generator