Their Uses & How to Tie Them

Most of the sailing knots we use today were developed by sailors serving aboard the square riggers of the 18th and 19th centuries. The running rigging aboard our sailboats today are much less complex than those of yesteryear of course, but we still need reliable, easily tied knots for such things as:

It's vital that every sailor is able to tie the correct knot for the purpose for which it was intended, as the safety of the vessel and its crew may well depend on it.

And it's important to remember that all knots reduce the strength of the line in which they are tied, some more so than others - but a reduction of 50% or so in polyester braids (and considerably more in dyneema) is a reasonable approximation.

Whilst there are many different sailing knots to choose from - far to many to remember how to ties all of them - the most useful and commonly used ones you'll find here. 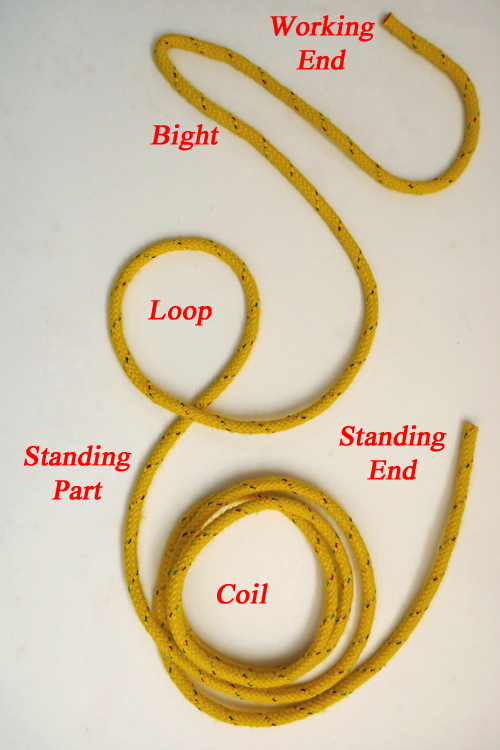 But before we get into the knots, we need to familiarise ourselves as to the various parts of the rope that we'll be referring to later...

Working End: The end of the rope that is actively involved in the knot tying process.

Bight: A section of the rope that is folded back on itself without crossing over.

Loop: A bight with two adjacent parts of the rope crossed over.

Standing Part: The part of the rope downstream of the working end.

Standing End: The other end of the rope.

Note: Not all sailing knots are knots; some are bends and others are hitches!

This is a term applied particularly to stopper knots (aka 'knobs') and loops, and anything else which isn't a hitch or a bend.

The sailors favourite method of creating a loop in a rope.

How to tie the Bowline...

A stronger version of the Bowline favoured by climbers.

How to tie the Double Bowline...

Bowline on a Bight

Used in recovering a Man Overboard.

How to tie the Bowline on a Bight...

How to tie the Double Overhand Knot...

Bends are used to tie two rope ends together - either two ends of the same rope or two ends of different ropes. Note that some bends are traditionally call knots (ie the reef knot and the fisherman's knot) although they are in fact bends.

A popular bend (not a knot) for joining lines of the same diameter.

How to tie the Reef Knot...

The most frequently used bend for joining lines of different diameter.

How to tie the Sheet Bend...

A stronger version of the Sheet Bend,

How to tie the Double Sheet Bend...

An even stronger version of the Fisherman's Knot.

How to tie the Double Fisherman's Knot...

Hitches are used to attach a rope to another object, such as a ring, a spar or a stanchion. A line or rope is said to be 'made fast' rather than 'hitched' because only the knot itself is called a hitch. Note that some hitches are traditionally called bends (eg the Anchor Bend) although, correctly speaking, they are hitches.

A popular method of making fast a line around a rail, a spar or another rope.

How to tie the Clove Hitch...

A useful hitch that locks in one direction and slides in the other.

How to tie the Rolling Hitch...

A quick and secure way of making fast a mooring line to a bollard.

How to Tie the Round Turn & Two Half-Hitches...

Once put under load this strong and reliable hitch (not a bend) is almost impossible to undo.

How to tie the Anchor Bend...

An alternative to the Anchor Bend.

How to tie the Buntline Hitch...

The most unreliable of all hitches, but an important component in several other reliable knots, bends and hitches - the round bend and two half-hitches for example.