The Different Types of Sailboats

If you’re a sailboat fanatic like me, all types of sailboats will attract your attention. Some more so than others admittedly, but all will have something about them that catches your eye.

If you’re not a fanatic (not yet, that is) but just an interested observer, then the first thing you’ll notice about a sailboat will be how many masts it has and the configuration of its sails - in other words, its 'rig'.

This observation alone will enable you to identify the five main types of sailboats — sloops, cutters, ketches, yawls and schooners - all of which are described here.

But apart from the various rig types, you can describe types of sailboats from a different viewpoint - sailing dinghies, dayboats, motorsailors, monohulls, catamarans and trimarans.

Let's make a start with the various rig types...

A single-masted sailboat with just two sails — a foresail (aka headsail or jib) and a mainsail — is a sloop, the purest type of sailboat.

The sloop rig can also be described as a Bermuda rig, Bermudian rig or Marconi rig.

The Sloop, a simple and efficient 2-sail rig 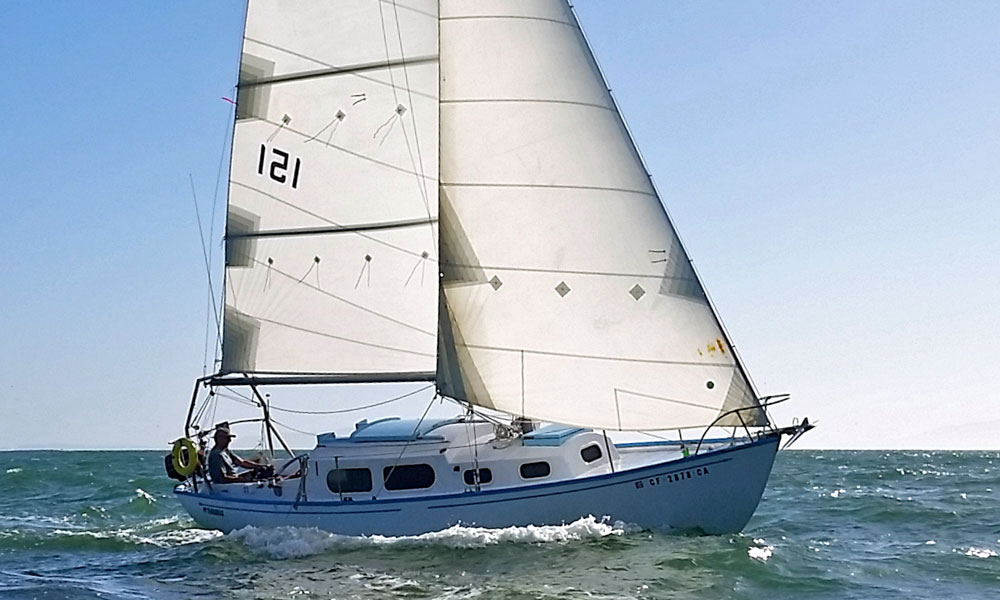 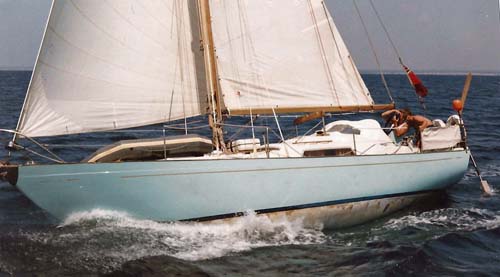 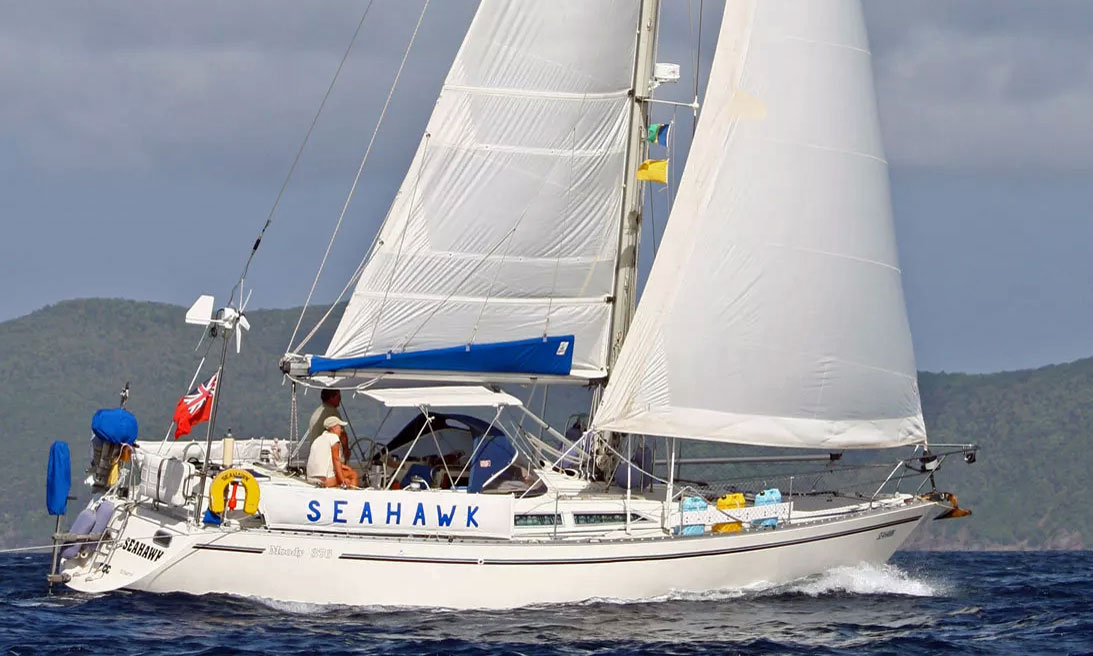 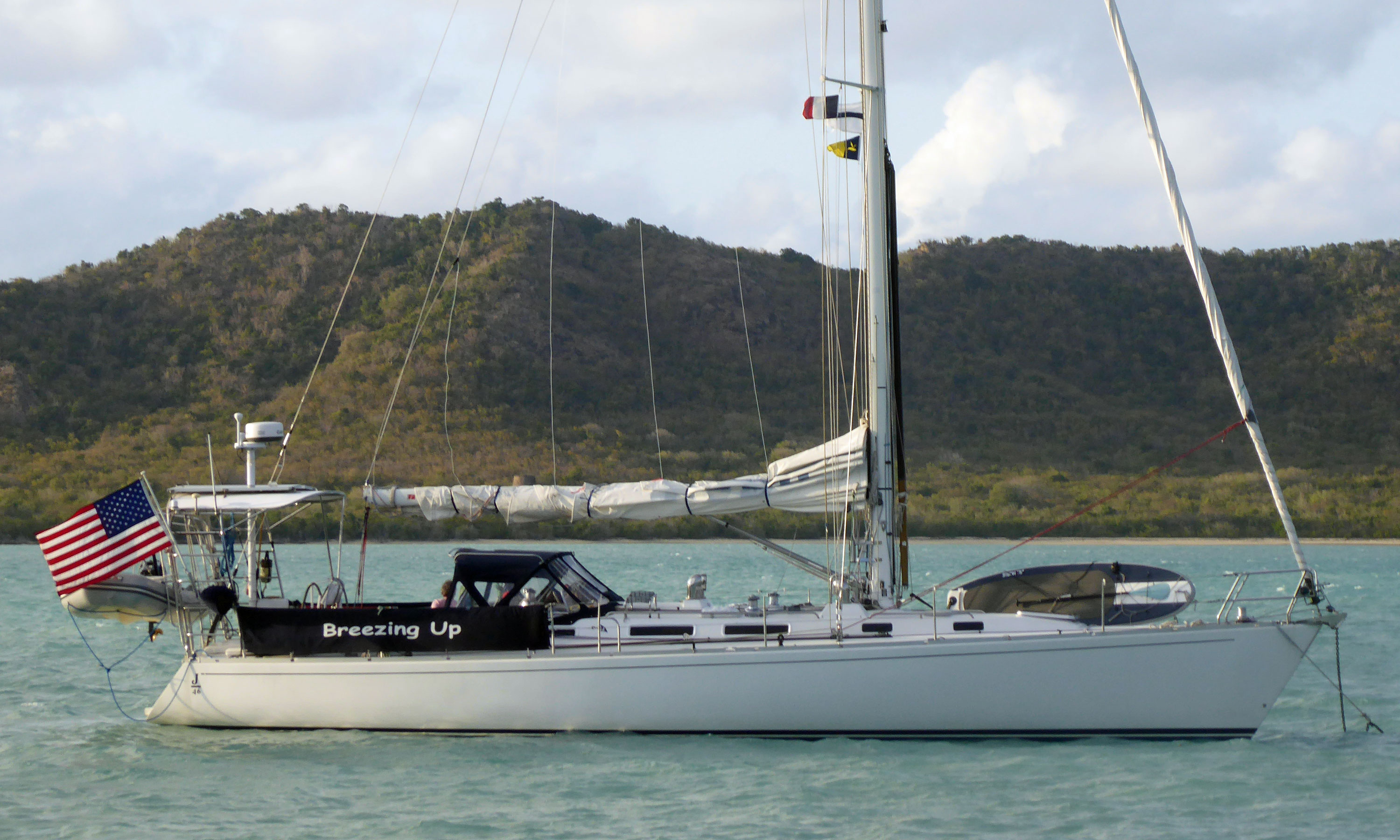 If a sloop has an additional sail between the headsail and the mainsail, then it's no longer a sloop - it's a cutter.

Some cutters - like the one shown here - have the foresail set forward on a bowsprit, with the inner forestay permanently rigged to the stemhead where the foresail otherwise would be, or to a central chainplate further aft on the foredeck.

A Cutter, two foresails and a mainsail 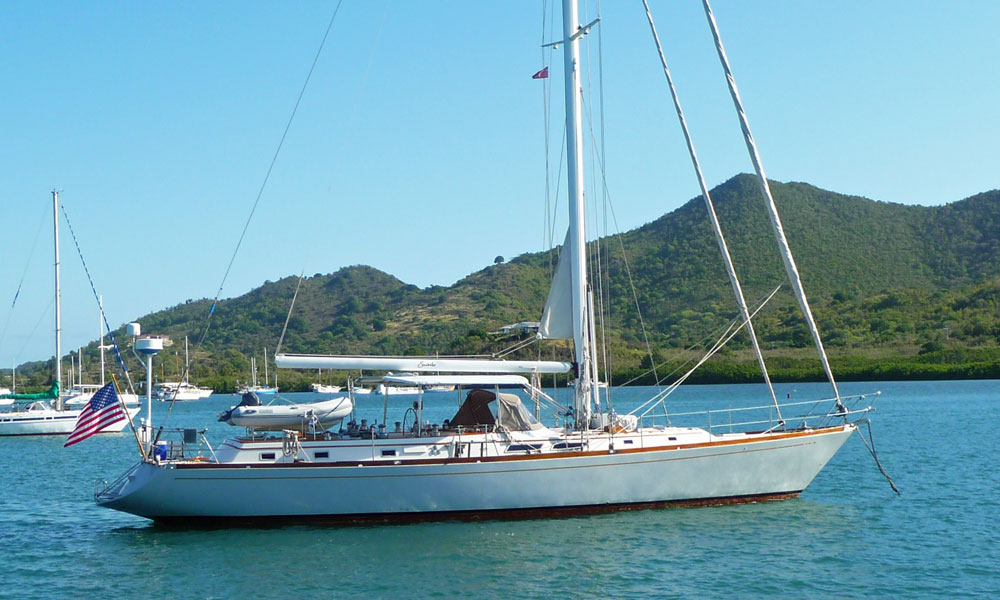 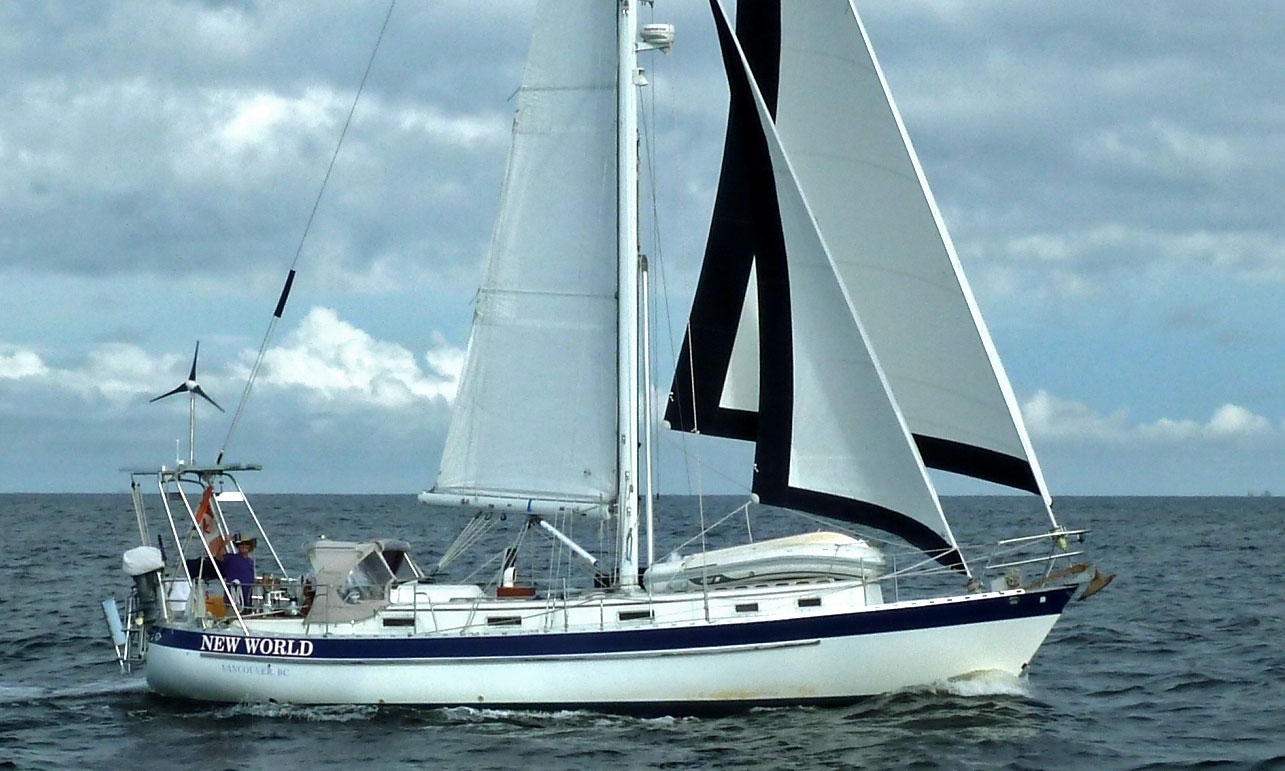 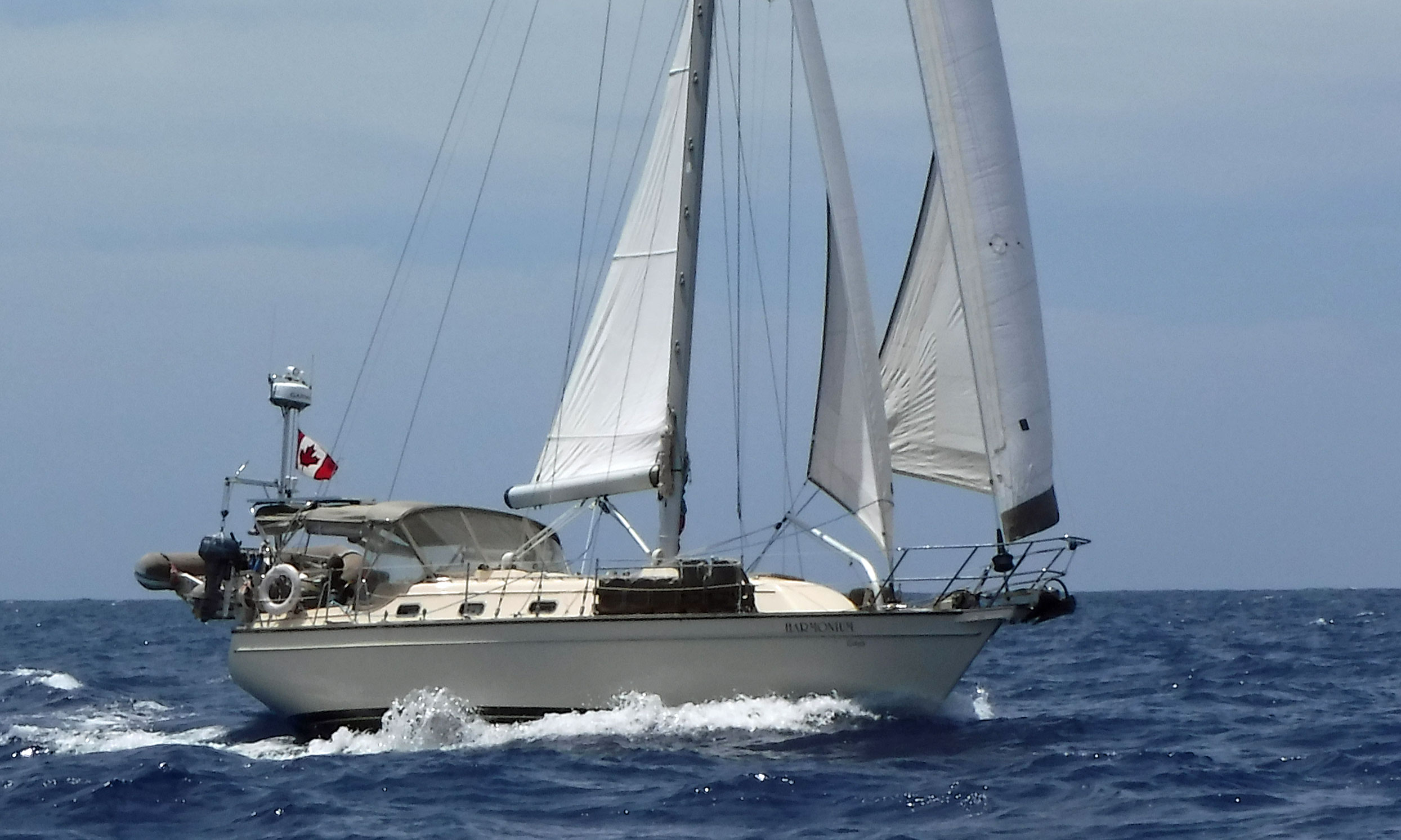 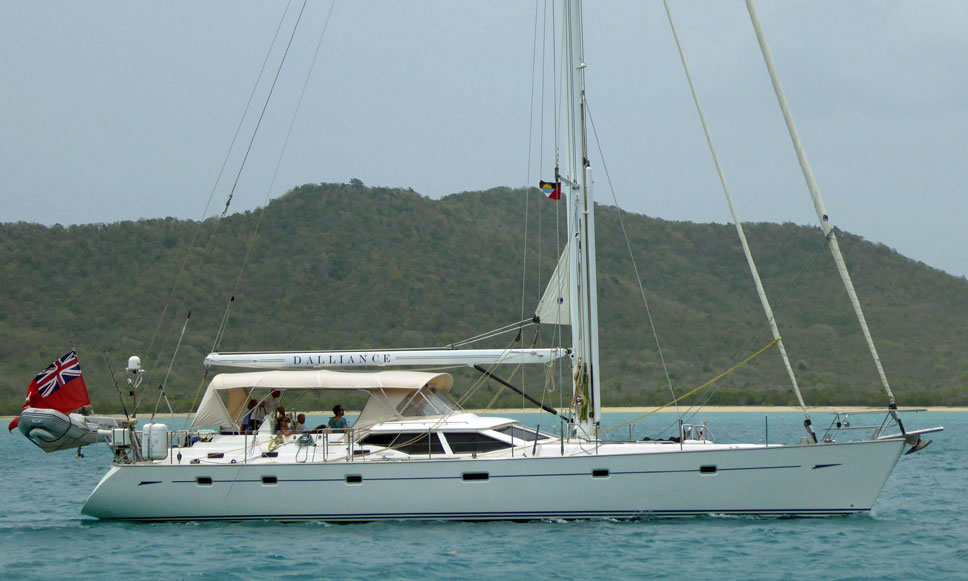 The following boats may look like cutters with their double headsails, but they're not cutters at all... 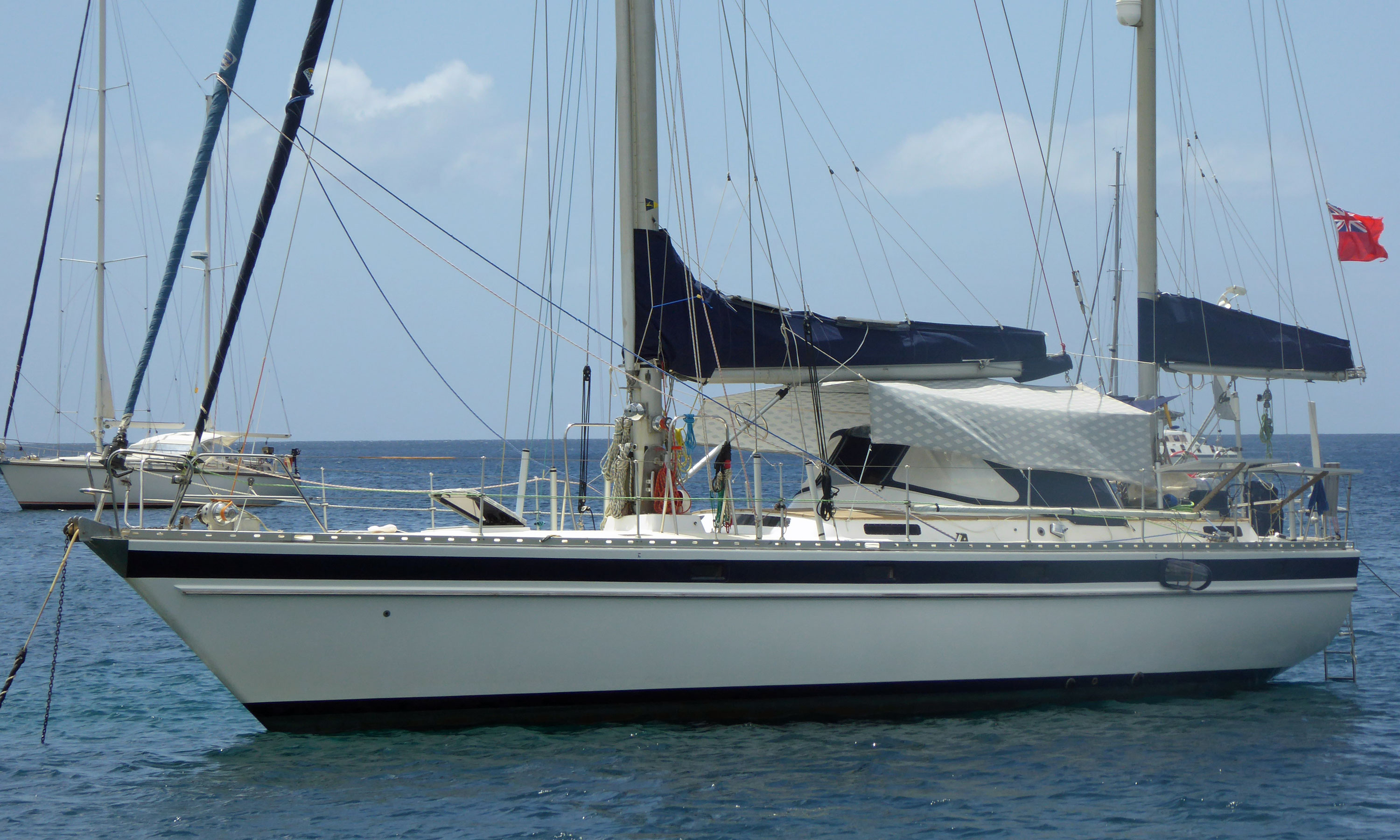 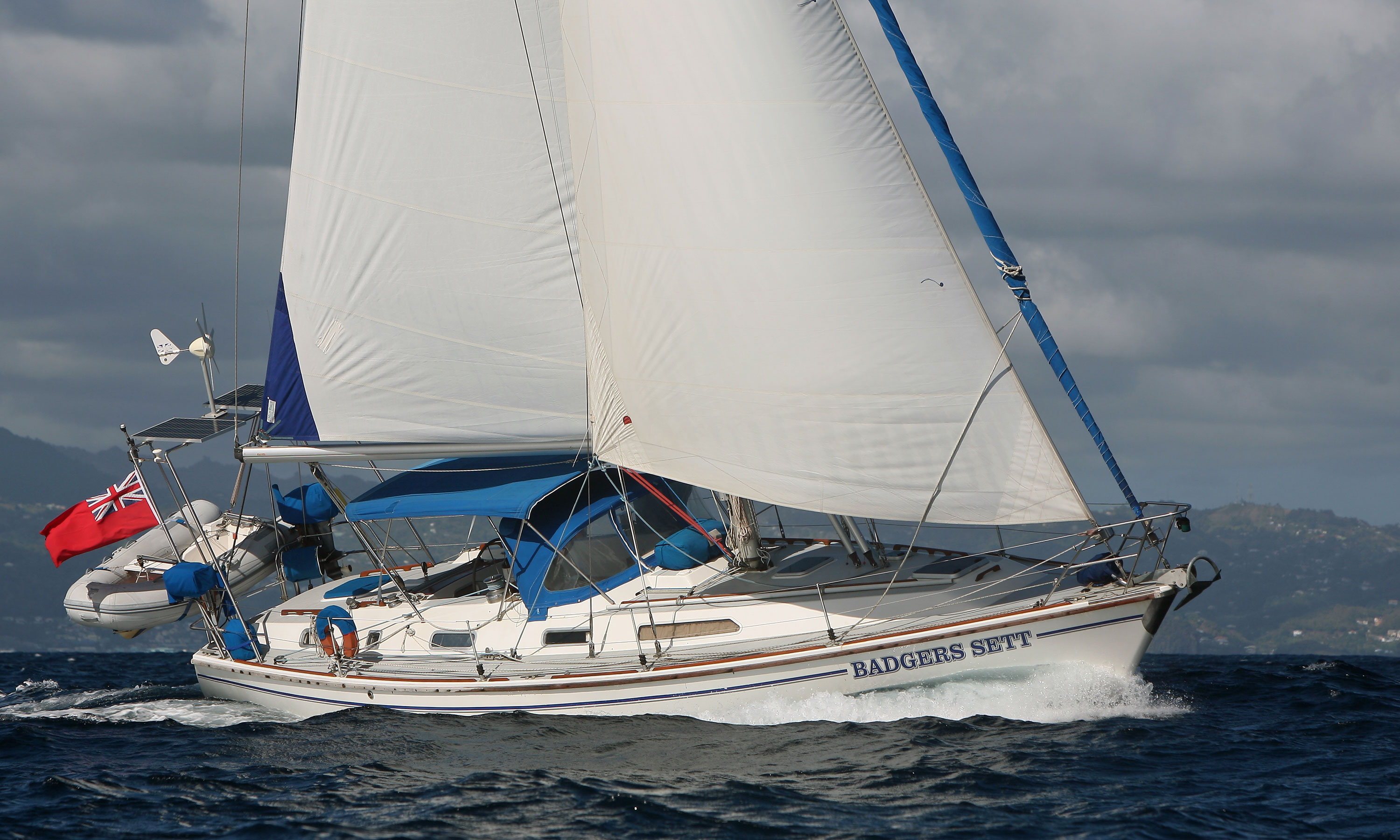 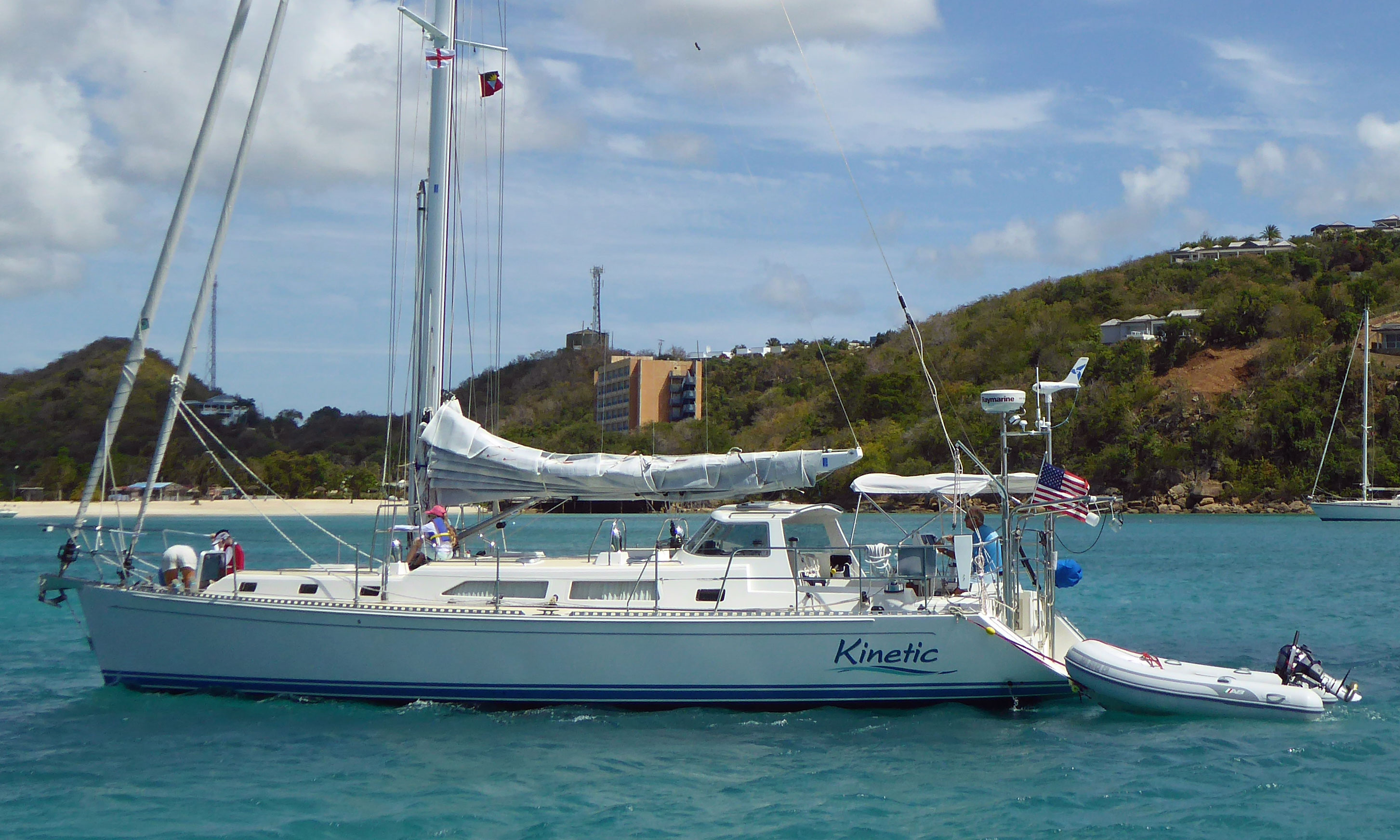 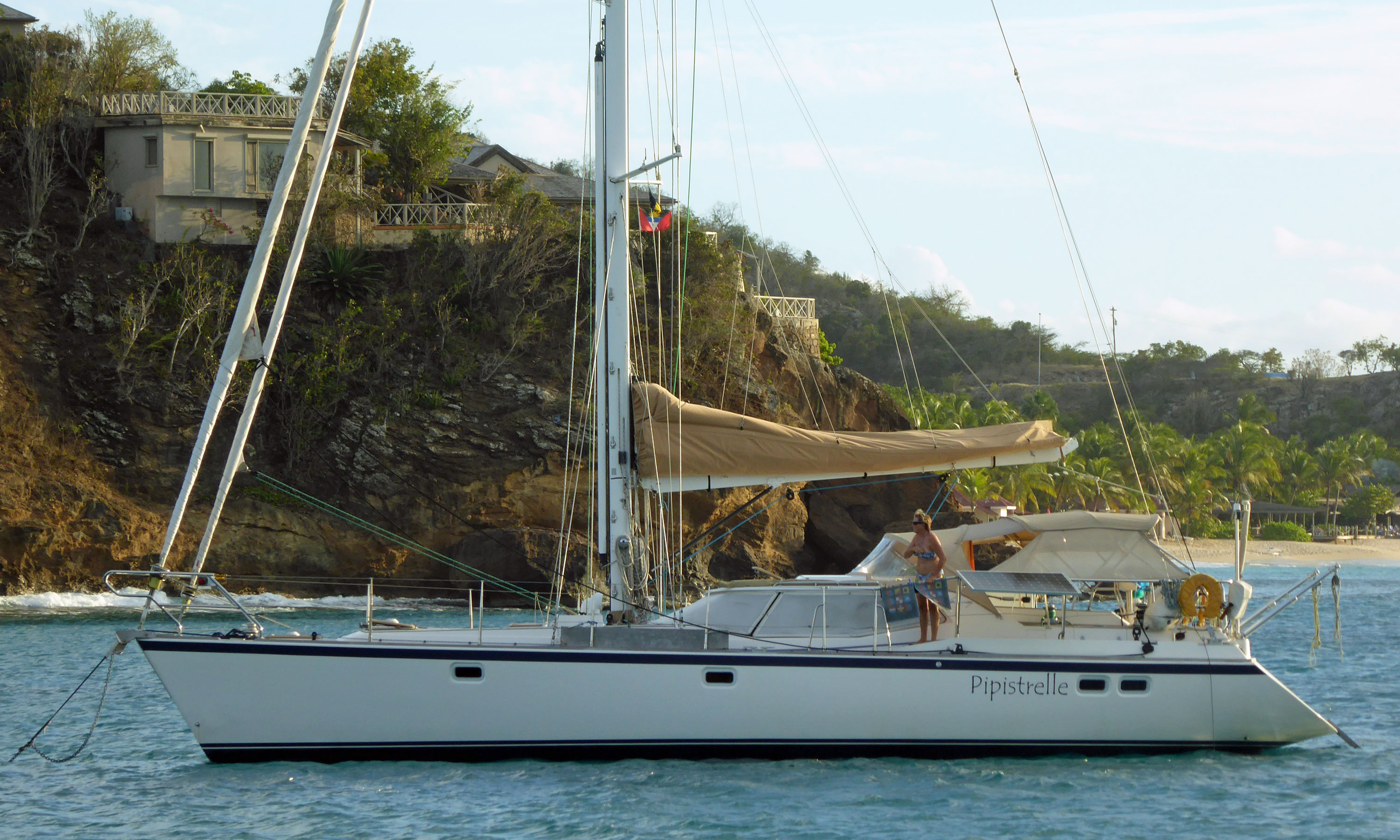 A ketch is a two-masted sailboat, a main mast forward and a shorter mizzen mast aft.

But not all two-masted sailboats are ketches — they might be yawls (see below).

A ketch may also sport a staysail, with or without a bowsprit, in which case it would be known as a cutter-rigged or staysail ketch.

A Ketch - mizzen mast forward of the rudder post 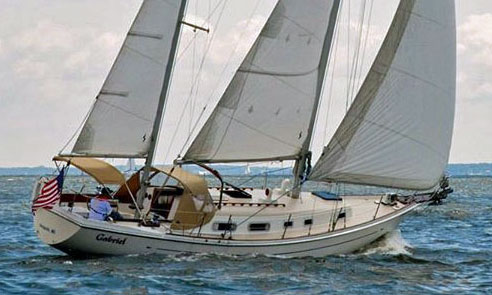 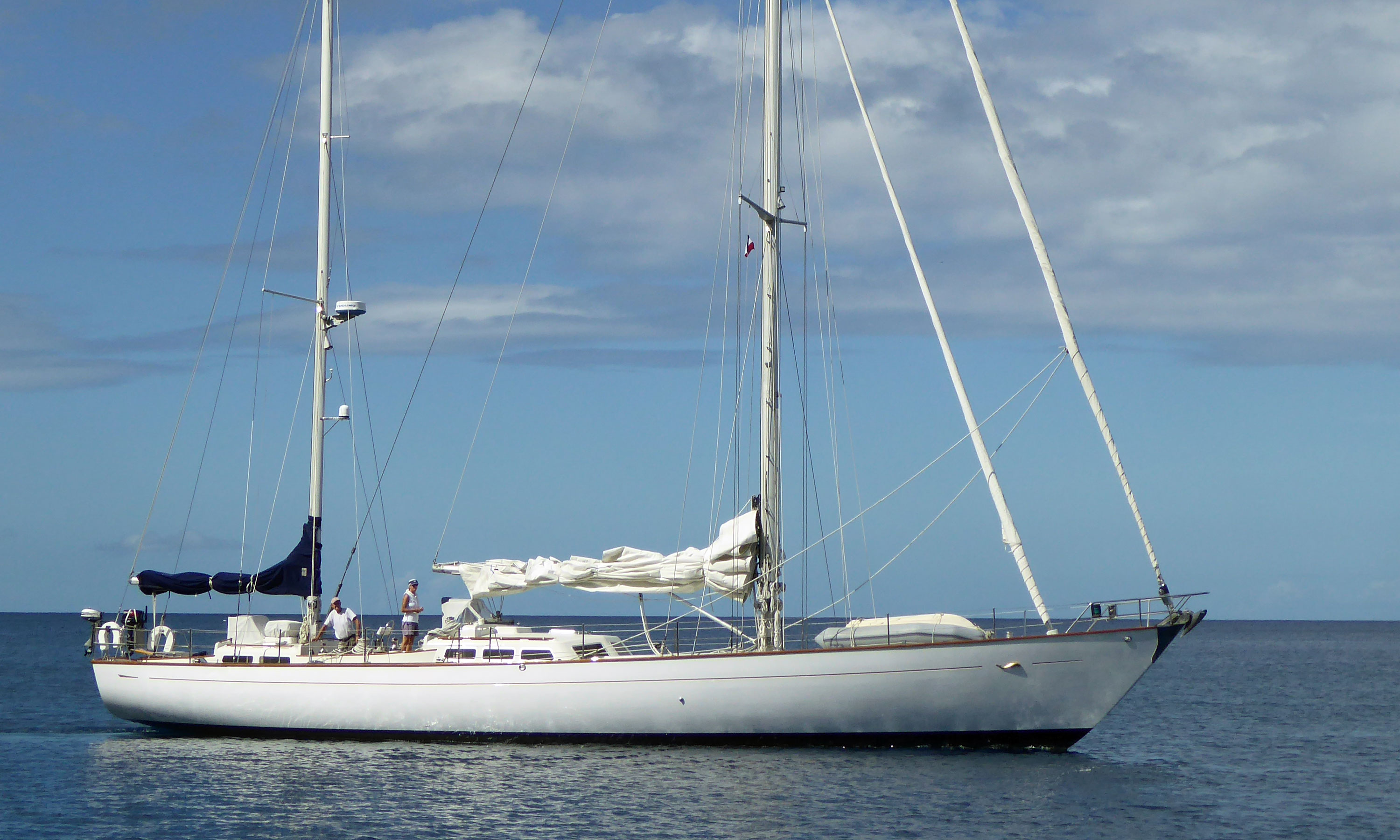 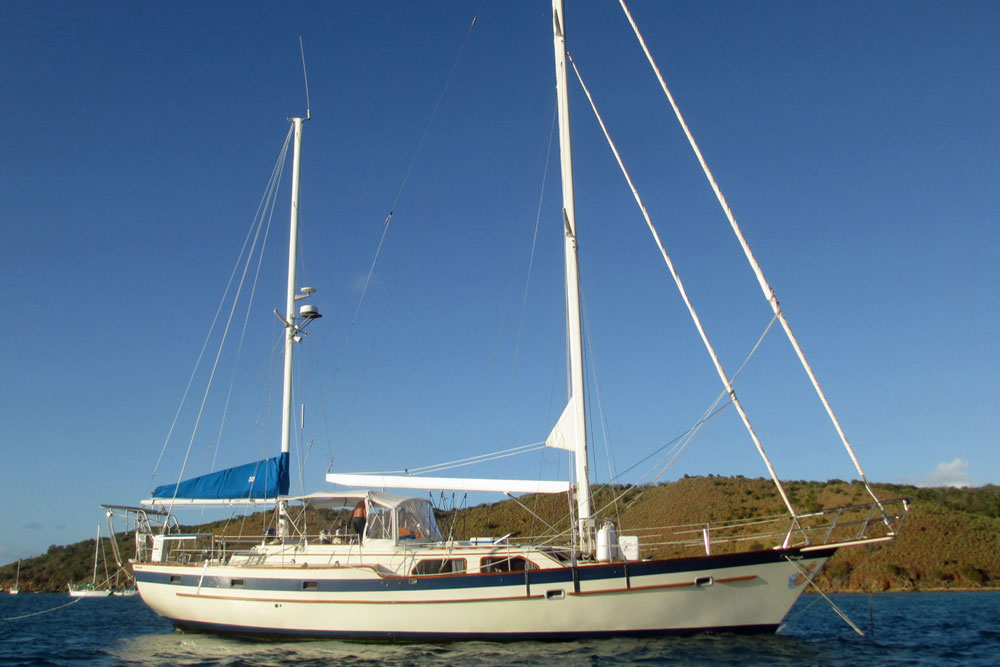 Note that the Ocean 71 and the Irwin 52 are cutter-rigged, and are traditionally referred to as Staysail Ketches.

Cat-ketches are recognised by the lack of any standing rigging to support their pair of unstayed masts.

And yes, if the after mast is taller than the foremast then it's called a cat-schooner sailboat. 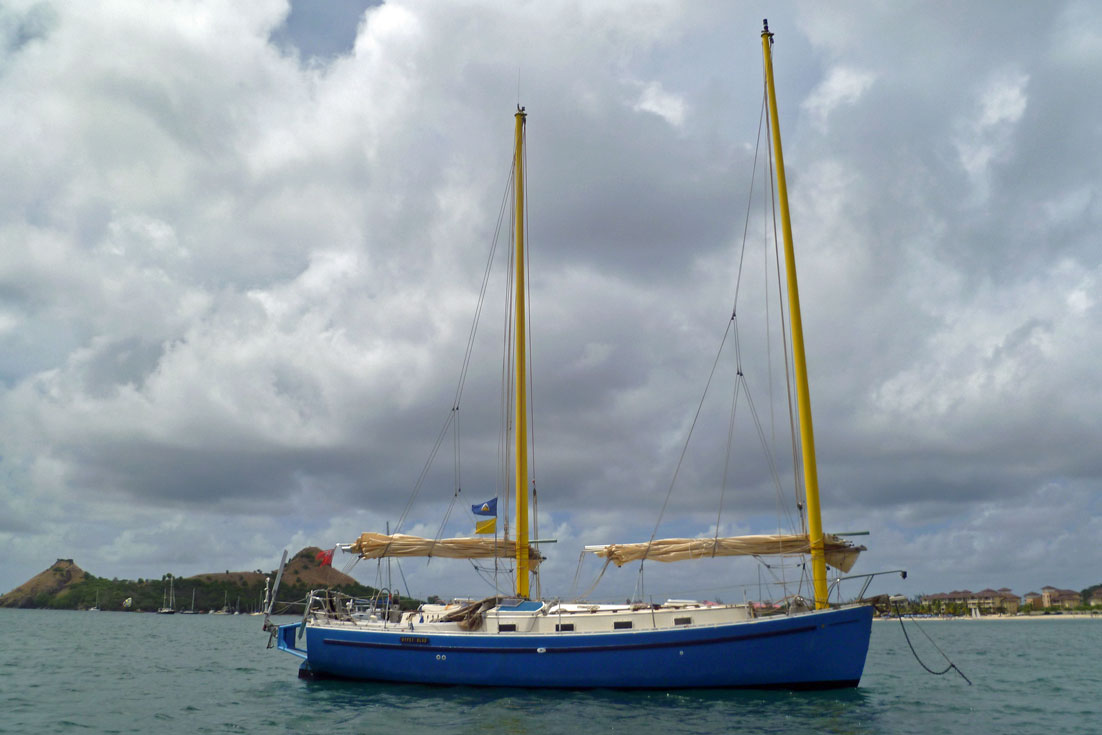 Yawls have their origins as old-time sail fishing boats, where the small mizzen sail was trimmed to keep the vessel steady when hauling the nets.

You’ll not be surprised to learn that a yawl with a staysail is known as cutter-rigged yawl.

A Yawl - mizzen mast aft of the rudder post 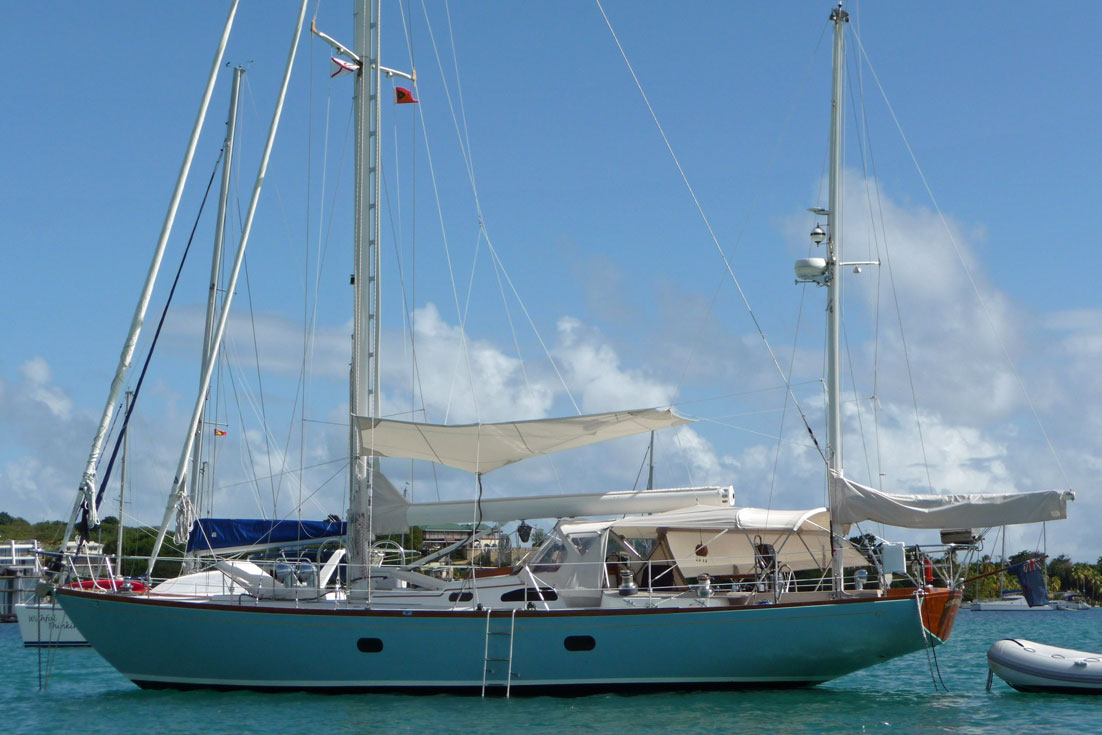 A Hinckley 48 Yawl. Note the position of the mizzen mast aft of the rudder post.

A schooner is a two-or-more masted sailboat, in which the aft-most mast - the mainmast - is the same height or taller than the foremast.

The one shown here is gaff cutter rigged, with a topsail set on the mainmast.

Many sailors agree that of all the different types of sailboats, a schooner under full sail is one of the most beautiful sights afloat. 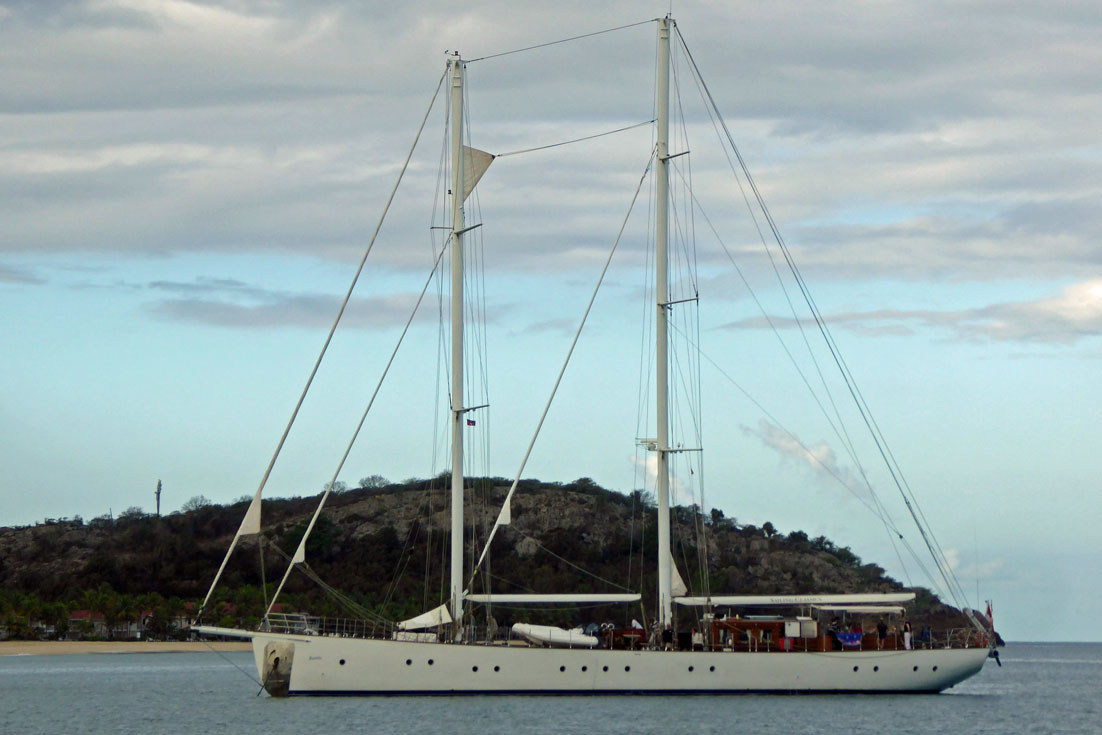 Gaffed-rigged sailboats, or 'gaffers', have their mainsail supported by a spar - the 'gaff' - which is hauled up mast by a separate halyard.

Often these types of sailboats are rigged with a topsail, as shown here and in the gaff schooner above, which really adds some grunt in light airs.

All this comes at a price of course, both in terms of material cost and weight aloft, which is why very few modern yachts are fitted with gaff rigs these days.

A Gaff Cutter with topsail

All artwork on this page is by Andrew Simpson 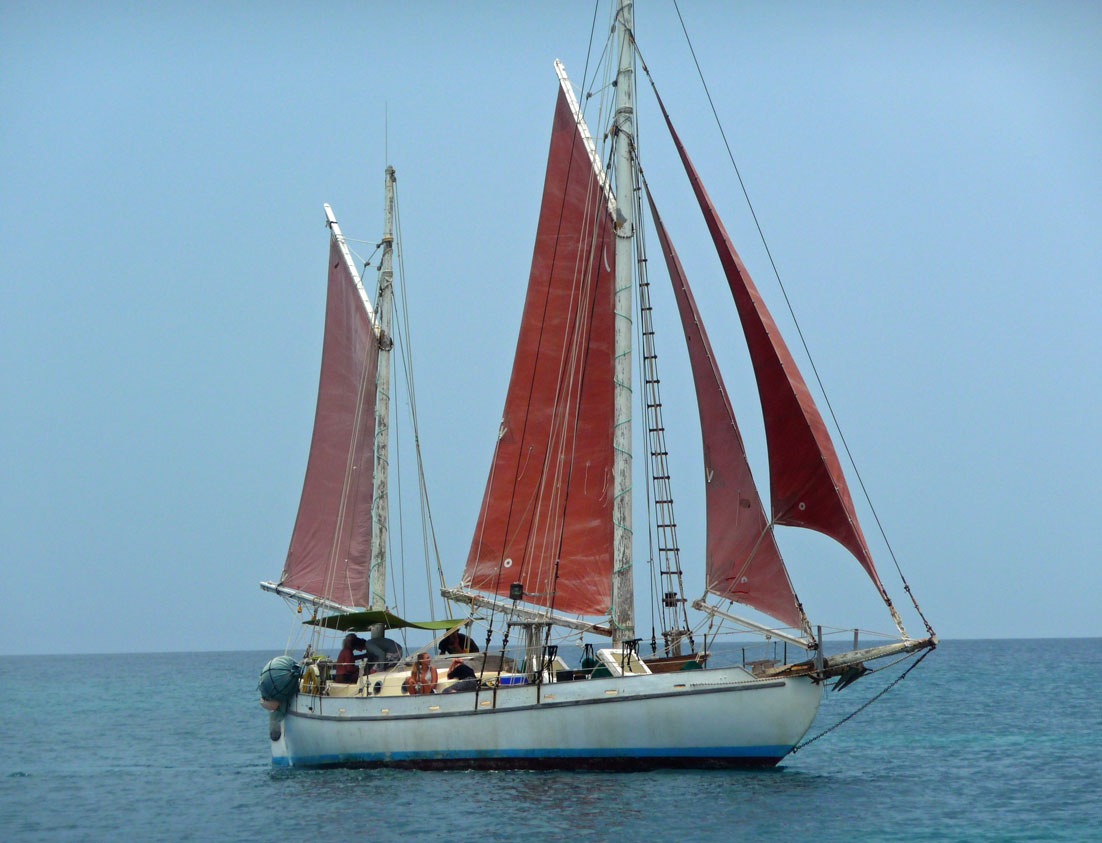 Examples of the Various Types of Sailboats... 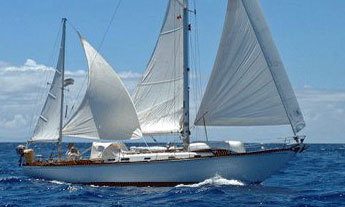 Other Types of Sailboats

The seven sailboat rig variations shown here are the most popular types of modern cruising boat rigs, but there are other rig versions which were once found on commercial, fishing, and naval sailing vessels.

And you can see examples of them here...

In this article I've said that ketches, yawls and schooners with two headsails can be called cutter rigged. This is a commonly used description but strictly speaking, there's only one rig that can accurately be called a cutter - and that's a single-masted sailboat with two headsails. My thanks to 'Old Salt' for drawing my attention to this!