The A-Z of Nautical Phrases and Other Boating Jargon

Are you confused by nautical phrases? Do they leave you 'all at sea'?

Can’t tell your boom from your bumkin or your tumblehome from your baggywrinkle?

Perhaps you're a seasoned seafaring man who knows them all, but otherwise this glossary of seafaring phrases should throw some light on your darkness...

Aback to Batten Down...

From Forestay to Hove-To...

Forestay ~ The foremost part of the standing rigging, which supports the mast and  prevents it from falling aft.

Forward ~ The area towards the bow of a boat.

Foul ~ To obstruct or tangle in some way, as in ‘the anchor is fouled’.

Fractional Rig ~ Where the forestay is attached some way down from the top of the mast.

This enables the mast to be bent aft by tensioning the backstay which flattens the main and de-powers it. Read more about mast rigging...

Frap ~ To tie two or more lines together.

Freeboard ~ The vertical distance from the waterline to the deck.

Furl ~To furl a sail is to roll it up. Note that 'furling gears' are not necessarily 'reefing gears'. Gaff ~ A small spar on which fore and aft sails are rigged, hence ‘gaff rigged’ as opposed to ‘Bermuda rigged’.

The vessel shown here is a gaff cutter, and she's flying a topsail.

Read about the various types of sailboat rigs... 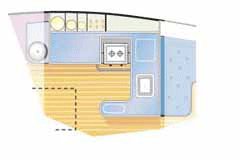 Galley ~ The ‘kitchen’ in a boat. Best sited near the companionway, although some sailboat designs have pushed them further forward into the accommodation.

Gamming ~ The act of yarning done by sailors with other sailors. Telling stories with a slight exageration.

Genoa ~ A forestay-mounted headsail large enough to overlap the mast.

GMDSS ~ An Acronym for the ‘Global Marine Distress & Safety System’.

Ghosting ~ A nautical phrase meaning to sail in little or no wind.

Go About ~ Another nautical phrase meaning to tack, or change direction across the wind.

Gooseneck ~ A metal fitting which secures the boom to the mast which allows the boom to articulate horizontally and vertically.

Goose Winged ~ Sailing downwind with the foresail on one side of the boat and the mainsail on the other. Usually the headsail is poled out as shown here.

It's a popular technique with cruising sailors who may not wish to use a spinnaker, as 'goose-winging' presents a good spread of sail to the wind.

But it's always a good idea to rig a jibe preventer on the boom to prevent an accidental jibe; an event which can have devastating consequences...

Ground Swell ~ A broad swell of the sea, often caused by a distant storm or other weather disturbance.

Ground Tackle ~ The anchor and warp. Read more about anchoring...

Guard Rail ~ A metal rail fitted around the edge of the deck to help prevent crew from falling overboard.

Guard Wires ~ Performs the same function as a rail, but uses wires supported on stanchions.

Gunkholing ~ A form of coastal cruising in relatively shallow waters, exploring creeks and estuaries. Deep-draft fin-keelers are clearly not best suited for this. Gunter Rig ~ A type of gaff rig where the gaff is held almost vertically and effectively forms a extension to the mast, enabling the gunter rig to carry the same size triangular sail as would a Bermudan rigged sail boat.

The gunter rig is often seen on trailerable sailboats as it allows all spars to be shipped inside the boat.

The version shown here (on a Drascombe Lugger) also sports a diagonal batten to add more sail area and support the leech.

Guy ~ A steadying line for a spar, particularly a spinnaker pole.

Gybe ~ When sailing downwind, to alter course so the sails set on the other side of the boat. Also spelled 'jibe'.

GZ Curve ~ Calculated data to enable yacht designers to predict the static stability of their creations.

The greater the area above the line, the higher the boat's stability and vice versa.

Halyard ~ The rope used to raise and lower a sail.

Hanks ~ Fittings sewn onto sail luffs for attaching to stays.

Hatch ~ An opening in the deck giving access to the boat's interior.

Hawse Pipe ~ A metal pipe in the foredeck through which the anchor chain passes to the locker below.

Head ~ (1) A triangular sail's uppermost corner. (2) The universal name for a sea toilet.

Headway ~ The forward movement of a boat through the water.

Head Foil ~ An alloy extrusion fitted around the forestay containing a groove (sometimes two) into which the luff of a headsail slides. Essential for roller furling headsails.

Head-to-Wind ~ A nautical phrase indicating that the bows are pointing directly into the wind.

Heading ~ The direction in which a boat is moving.

Headsails ~ A sail set between the mast and the bow. Read more about sails...

Heel ~ The attitude of a boat when it leans over and travels on one side, as reacts to either the force of the wind or a shift of weight aboard.

Heave-to ~ To keep a boat’s head to wind by sail adjustment, while keeping little way on. A proven way of riding out a gale.

Heaving Line ~ A light line, often with a Monkey's Fist tied in the end, for throwing ashore or to a man overboard.

Helm ~ The steering mechanism. The tiller or wheel. The person steering (of either gender).

Helmsman ~ The person steering a boat.

Highfield Lever ~ A tensioning device which can be rapidly disconnected.

Hounds ~ The location on the mast at which the lower shrouds are attached.

Hove-to ~ Lying nearly stationary in the water, usually with the foresail 'aback'.

Next: Nautical Phrases from Inboard to Meridian...