The Rolling Hitch
How to Tie It & When to Use It

The Rolling Hitch, also known as the Magners or Magnus Hitch, is a very useful friction hitch for the sailor. In fact there are two specific situations in which it has no equal:

In ether of these situation the rolling hitch won't slip if you've tied it correctly.

Another attribute of the rolling hitch is its ability to slide along the rail, spar or rope around which it's tied - when you want it to to, that is. Just grip the entire knot and move it bodily, but try and pull it along with the standing part and it will defiantly refuse to move.

How to Tie the Rolling Hitch

For the purpose of the illustrations we've employed a wooden spar, but it could similarly have been a stanchion, rail, guardwire or taught rope. 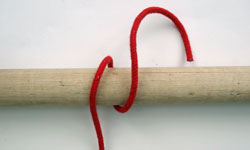 Take a turn around the spar... 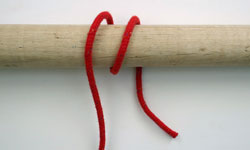 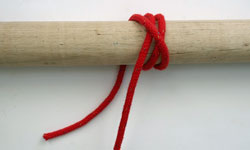 Now take another turn back in the other direction over the first two turns... 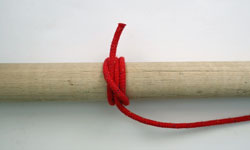 ...and tuck the working end back under itself.

The rolling hitch will move along the spar if pushed by hand, but trying to move it by pulling on the standing part of the line will get you nowhere.