Take it from someone who's got years of Caribbean Island Hopping under his keel - there's few, if any, sailboat cruising grounds that can compete with what the Windward & Leeward Islands of the Eastern Caribbean have to offer.

The Leeward Islands stretch from Anguilla to Dominica; the Windward Islands from Martinique to Grenada.

But What's So Special About These Islands?

Got your attention? Got your up-to-date navigational charts and pilot books to hand?

Right, let's cast off our lines and head south from Anguilla, the northernmost island of the Leeward Islands...

Island Hopping through the Leeward Islands of the Caribbean

Like many of these islands, Anguilla was discovered in the 15th century by the Italian explorer Cristopher Columbus.

He named it Anguilla, meaning 'eel' or 'little snake' in Italian, presumable owing to its shape. Nowadays, Anguilla is a British Overseas Territory. 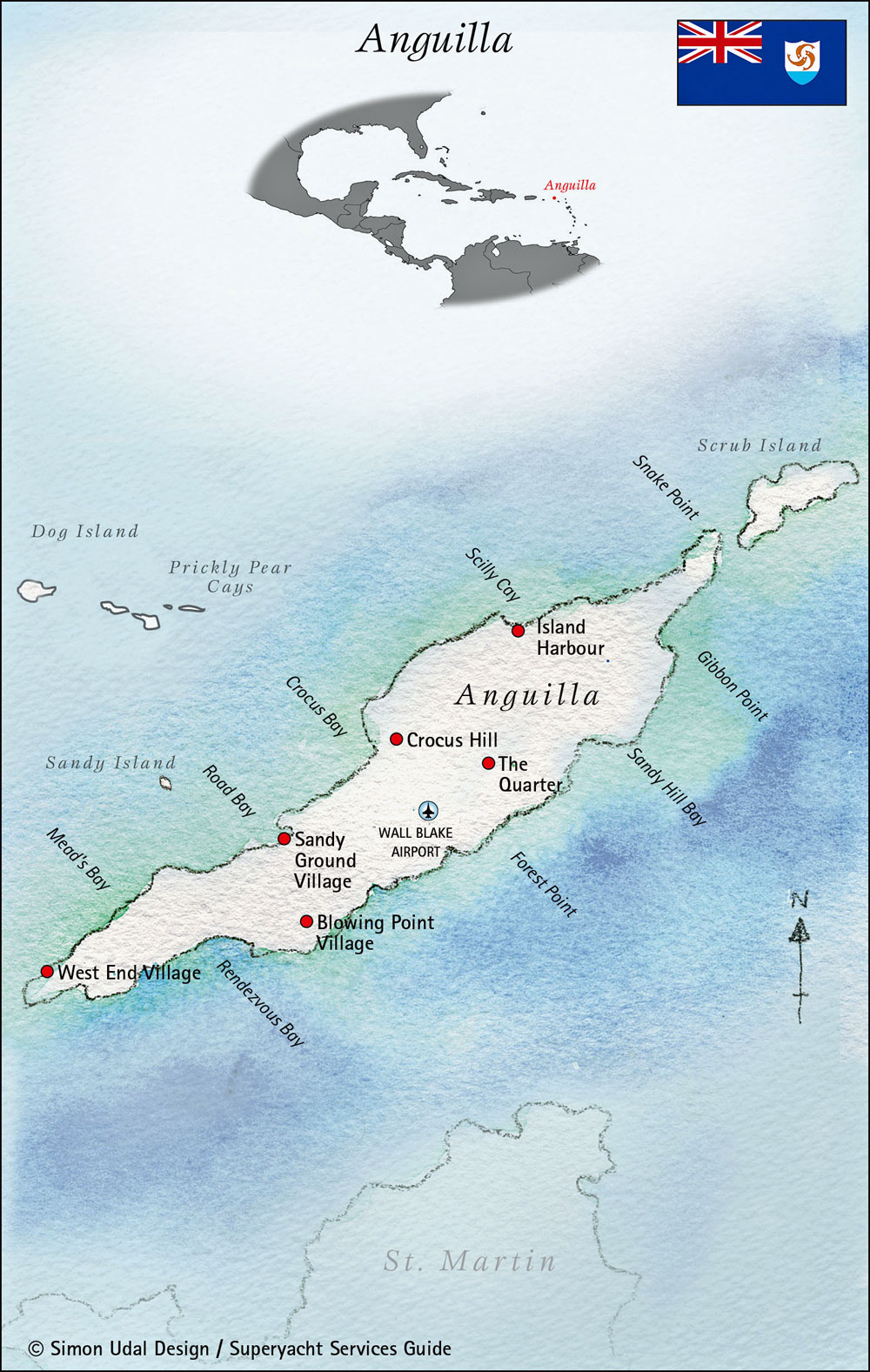 The main anchorage is Road Bay, where you'll find the Customs & Immigration Offices near the dinghy dock.

There are several small but exquisite islands to the north:

But you must give Scrub Island a miss as there's no suitable anchorage for yachts.

The above map of Anguilla, and the other island maps that follow below, are reproduced with the kind permission of their creators 'Superyacht Publications Ltd' and are taken from their super-useful Superyacht Services Guides for the Caribbean in which they make recommendations for all yachting services in each of the islands. 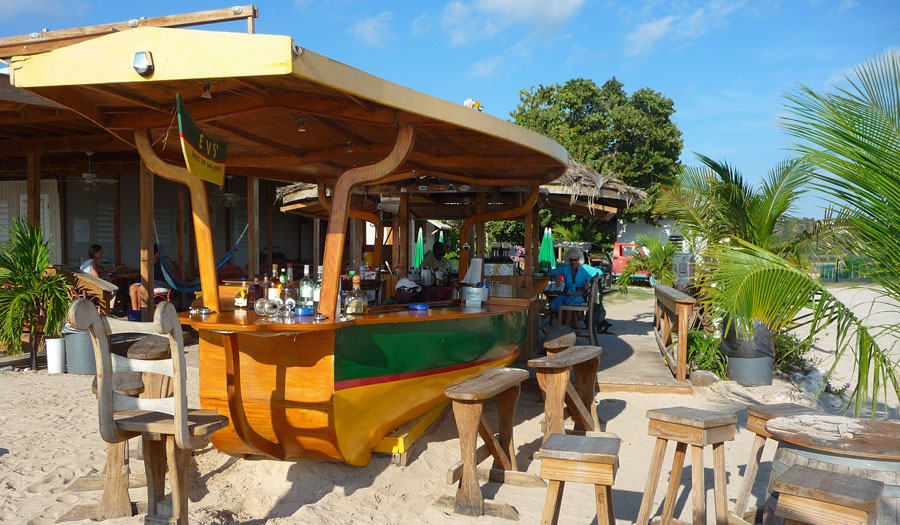 Is it a boat that wants to be a bar, or vice versa? 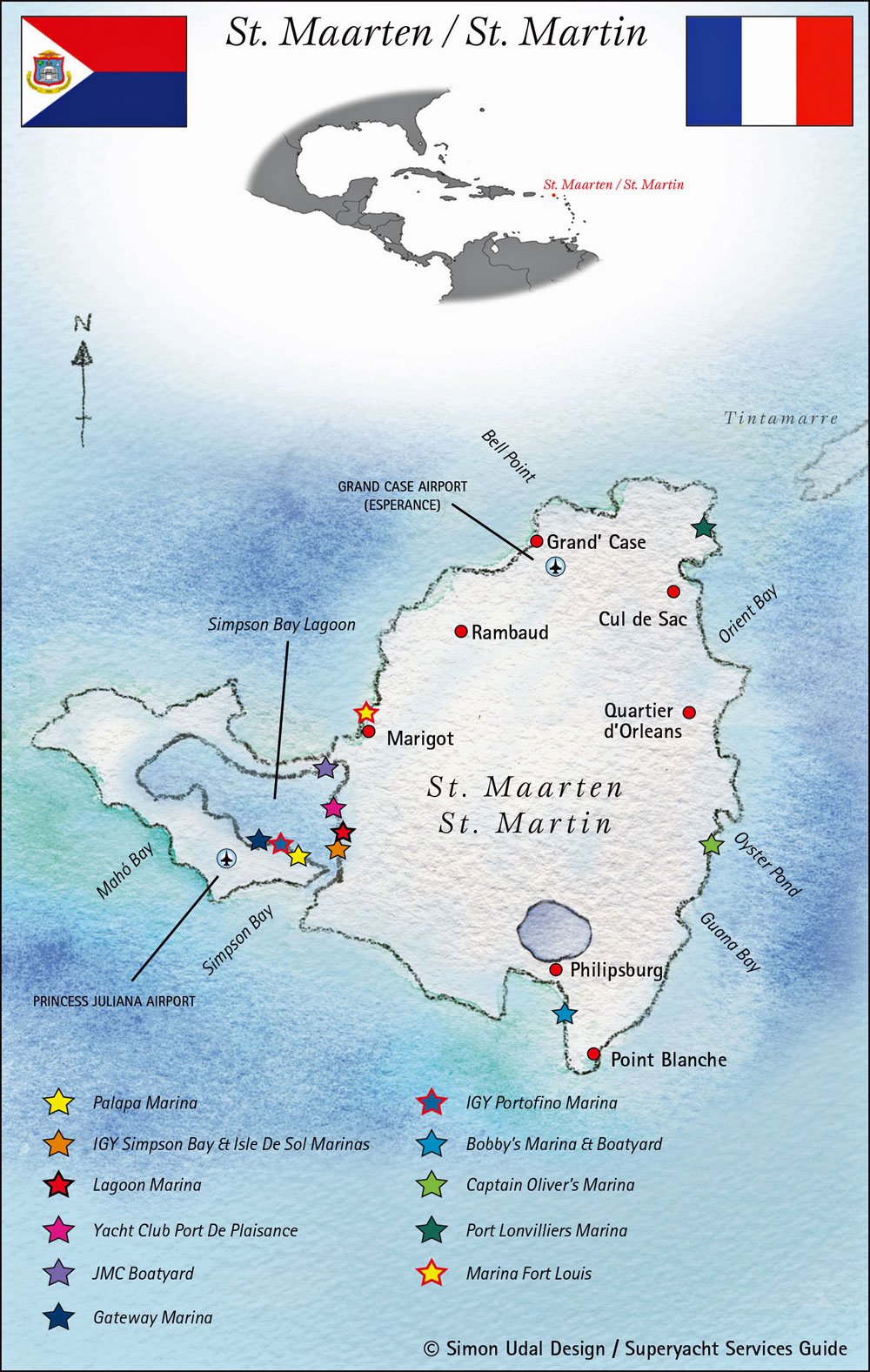 Ports of Entry: Simpson Bay (Dutch side); Marigot (French side)

The popular anchorage of Simpson Bay Lagoon is similarly shared on a north/south basis, accessed through individual French and Dutch channels.

Some years ago, a stormy night at anchor in Simpson Bay Lagoon demonstrated to me that the holding is distinctly unreliable; the events of that night will stay in my memory for a long time.

Ashore, the night-life is lively - particularly so on the Dutch side! 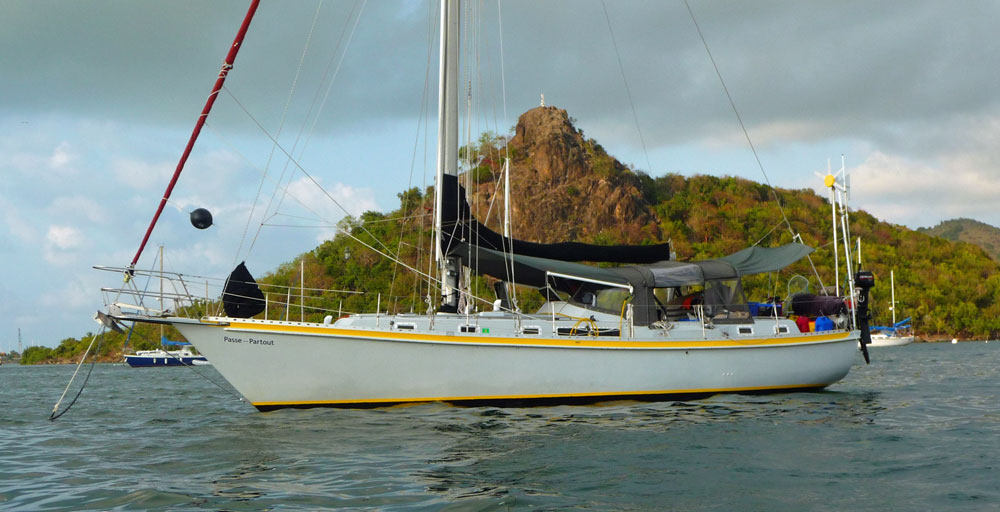 At anchor in Simpson Bay Lagoon, under the exquisitely named Witch's Tit.

Some 100Nm to the west of St Martin & Sint Maarten lies another Caribbean Island Hopping paradise - the Virgin Islands.

But for the moment we're continuing south to the French island of St Barts...

When beating southeast (and it will be a beat) from St Martin & Sint Maarten to the French island of St Barts - or more correctly St Barthelemy - you should resist the temptation to stop off in the anchorage at Ile Fourche before checking in with Customs & Immigration, as it will seriously upset them if they find out about it. 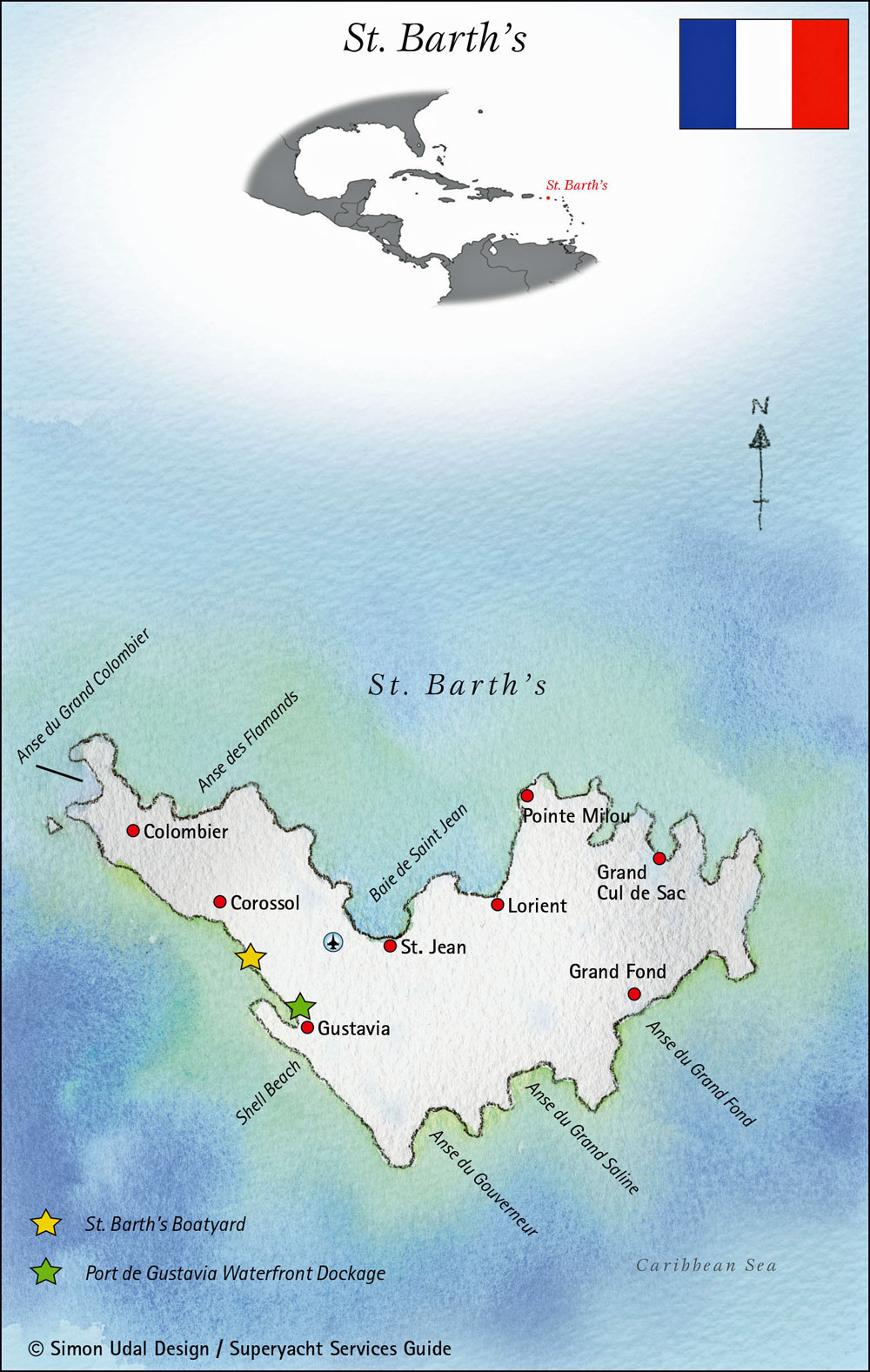 Instead, bash on to Gustavia to complete checking-in procedures which, as in all the islands of the French West Indies, is a breeze.

You'll be hard pressed to find an available dock in the harbour, so anchor outside and dinghy in, tying-up in the dinghy dock close to the Port captain's Office.

Two of the anchorages you won't want to miss are Anse du Colombier and that on the aforementioned Ile Fourchue, both of which offer good snorkelling - and in the case of Ile Fourche, some solitude; there's nothing ashore but a dilapidated hut. 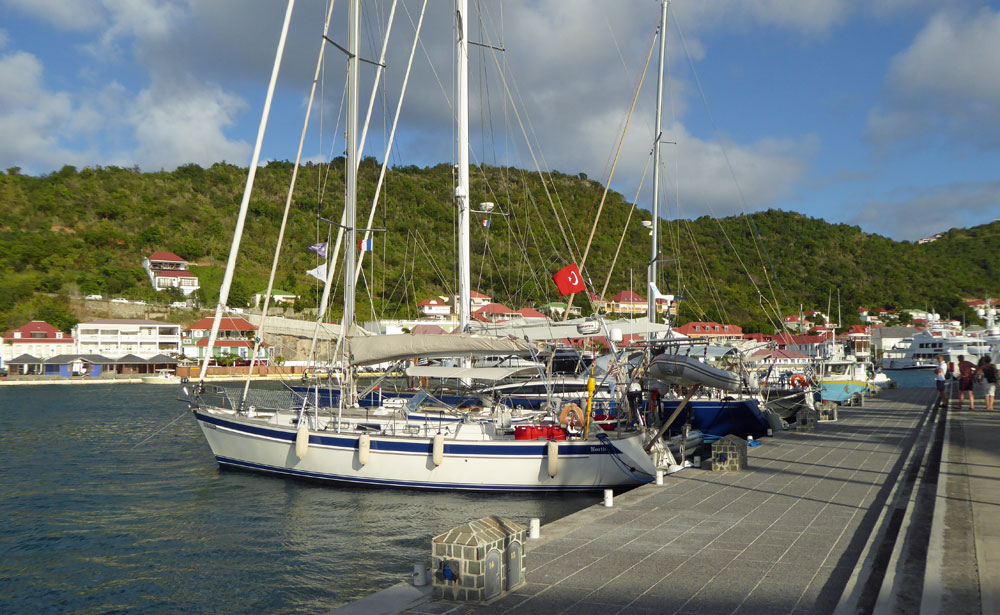 The Customs & Immigration Dock at the Port of Gustavia.

When it's time to leave St Barts you have the choice of two island hopping destinations:

Saba is a small Dutch Island, the most westerly of the Leeward islands. 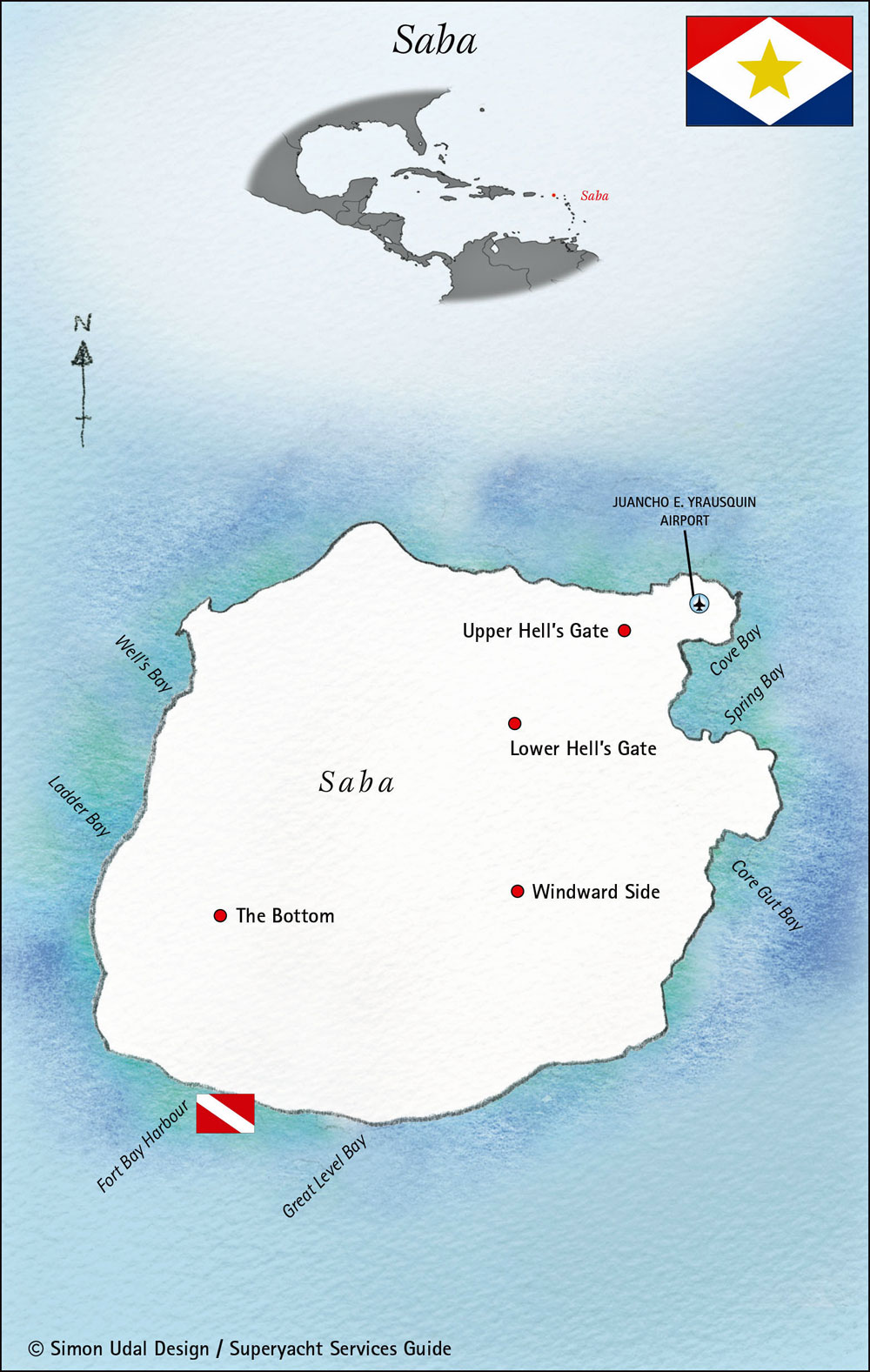 Currency:  US Dollars (US$)

The two main anchorages are at Well's Bay and Ladder Bay, where you can pick up a mooring if any are available.

The trip around to the harbour at Fort Bay can be something of a challenge in a small dinghy.

There are also four moorings off Fort Bay, but these are likely to be less comfortable unless a northerly swell is running.

Saba is unique, and is another of those destinations where an island tour is an absolute must! 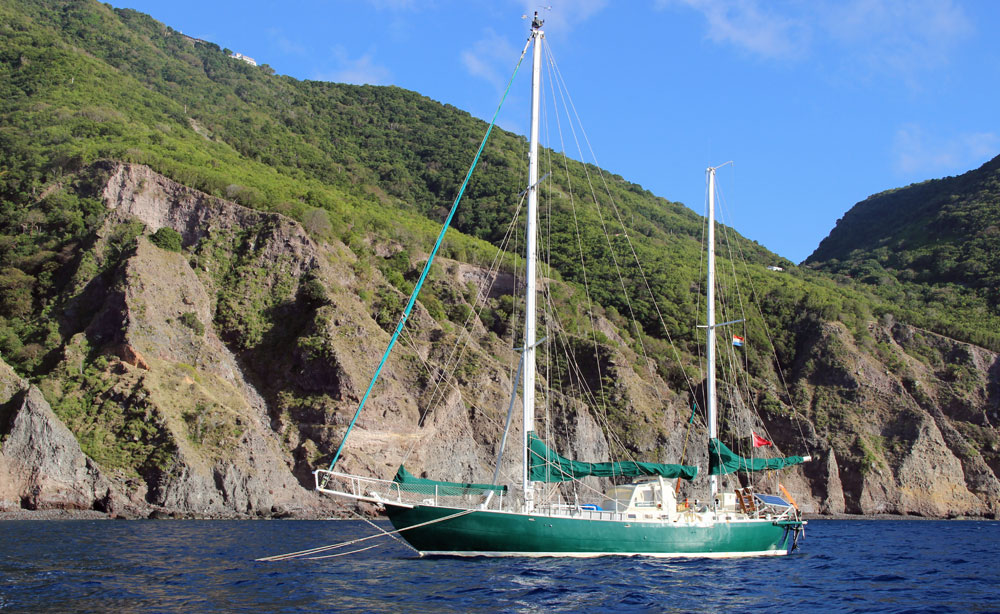 Currency:  US Dollars (US$)

Statia has the dubious distinction of having probably the rolliest anchorage in the Caribbean. It's at Oranje Baai.

Unusually for us we picked up a mooring, possibly swayed by the apparent bargain of getting the third night free if you pay up-front for two.

As it turned out, we had had more than enough after the second night without sleep and proceeded gratefully southwards to St Kitts & Nevis.

In all other respects, Statia is delightful. The dormant volcano 'The Quill' demands that you hike to its summit. A well-marked trail takes you to the rim of the crater where you can peer down into its densely foliated interior.

Curiously, a cockerel led the way for us, managed to star in every photo we took and followed us back down. 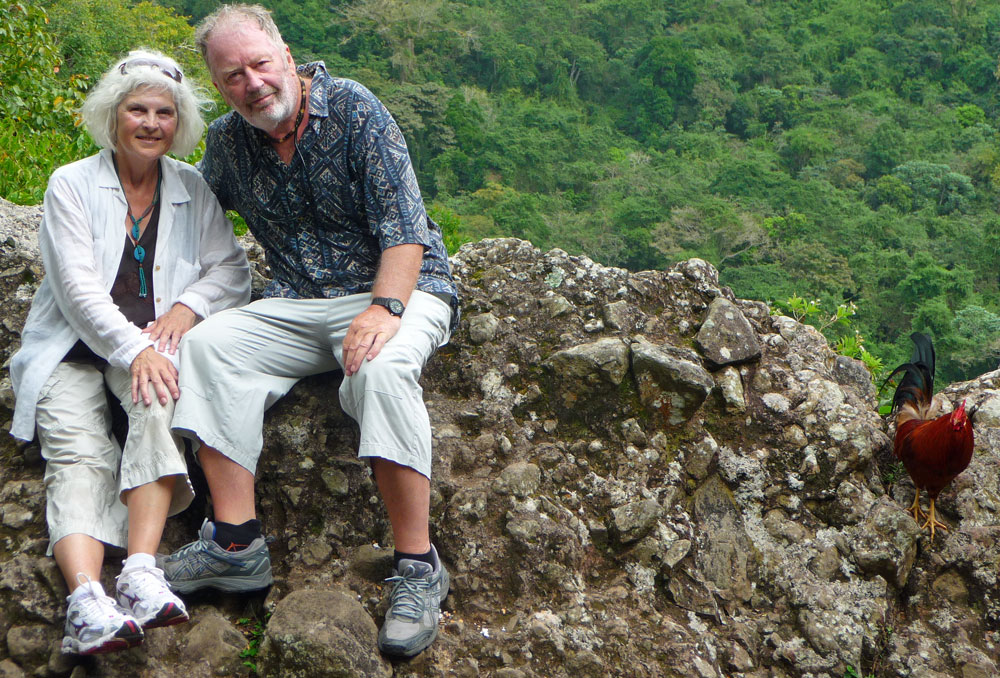 The two-island state of St Kitts & Nevis was granted full independence from Great Britain in 1983, but opted to remain within the British Commonwealth. 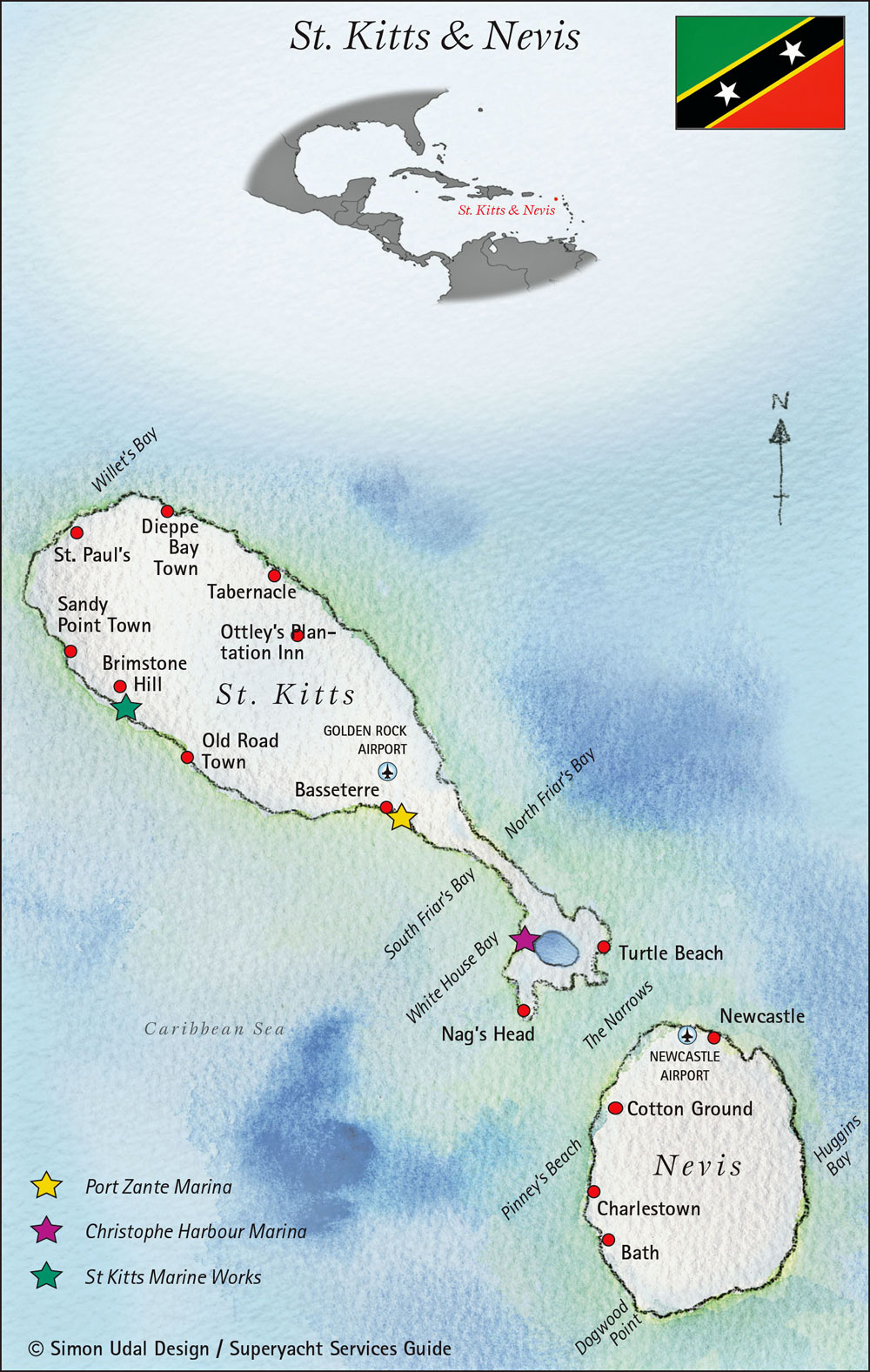 Approaching St Kitts from the north its densely rainforest-covered central mountain range is prominent. This provides a perfect home for the large population of African green vervet monkeys descended from those having arrived via the sail trading vessels of the past.

This provides a perfect habitat for the large population of African green vervet monkeys descended from those having arrived via the sail trading vessels of the past.

The best anchorages in St Kitts are found in the southern end of the island, but all can be uncomfortable - untenable at times - if there is south in the wind.

In such conditions, the Porte Zante Marina at Basseterre provides comfort and safety.

St Kitts has the only operating railway in the Caribbean, a relic from its sugar cane industry. It used to run around the island, but part of it has been restored for the tourists.

Just across 'The Narrows', is Nevis. You won't have any trouble finding a mooring on the west side of Nevis - there are around 100 of them belonging to the NPA (Nevis Port Authority) - and you can drop the hook in other areas outside the mooring field.

Ashore there are wonderful walks through the rain forest, where monkeys abound.

Plenty of vacant moorings off Pinney's Beach, Charlestown, with St Kitts in the background. 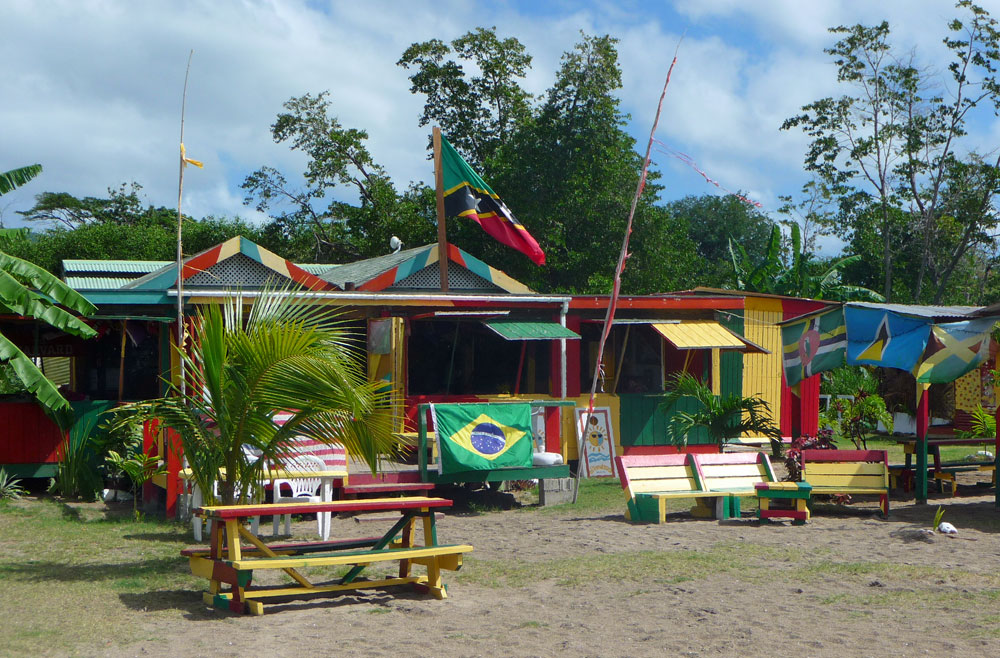 The Soufriere Hills volcano on the southern region of Monserrat erupted in 1985 and has been polluting the atmosphere with volcanic ash ever since, as a result of which there's much to be said for sailing down the windward (east) side of the island. 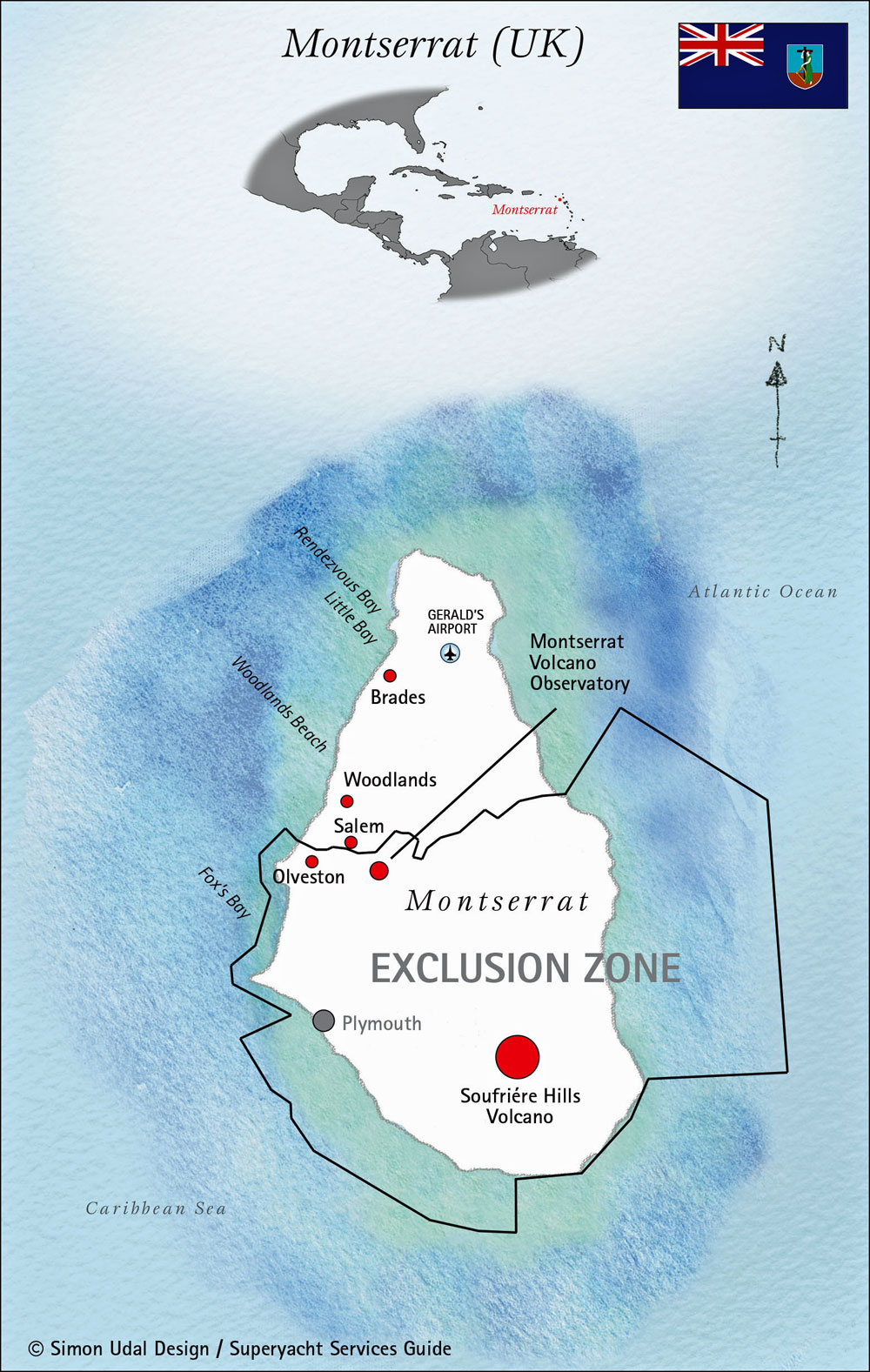 With more than half its area designated an exclusion zone you may think that Montserrat would be hardly worth a visit, but nothing could be further from the truth.

Anchor your boat in Little Bay and hire the services of an island tour guide - you'll not be disappointed.

There are numerous hiking trails into the rain forest, where you'll find a multitude of tropical birds and plants.

Continuing to island hop, you have two choices of destination: northeast to Antigua or southeast to Guadeloupe. Clearly the wind direction will play a part in choosing which one. 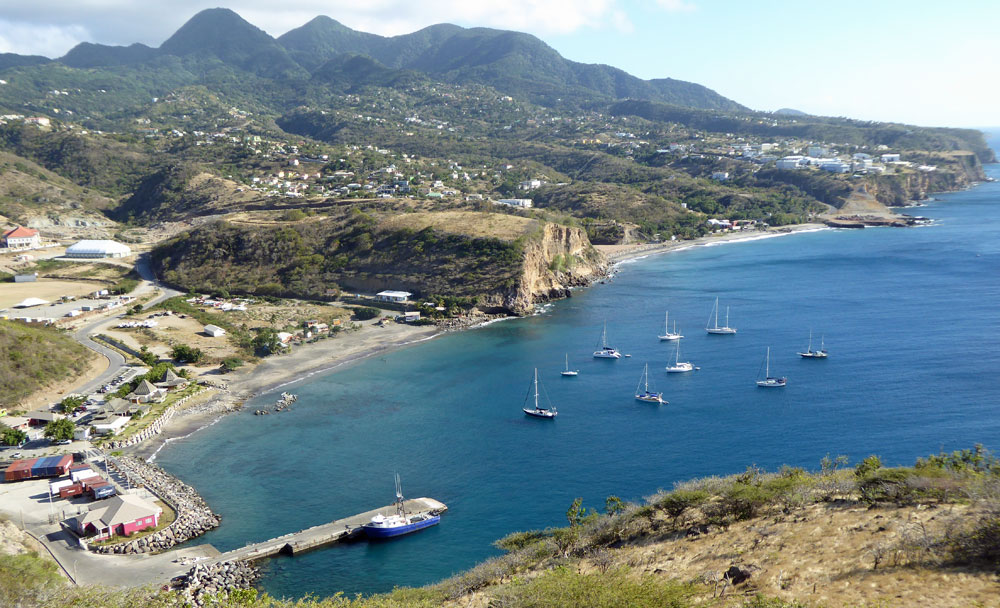 Antigua & Barbuda are a two-island country that joined the British Commonwealth in 1981, following independence from the UK. 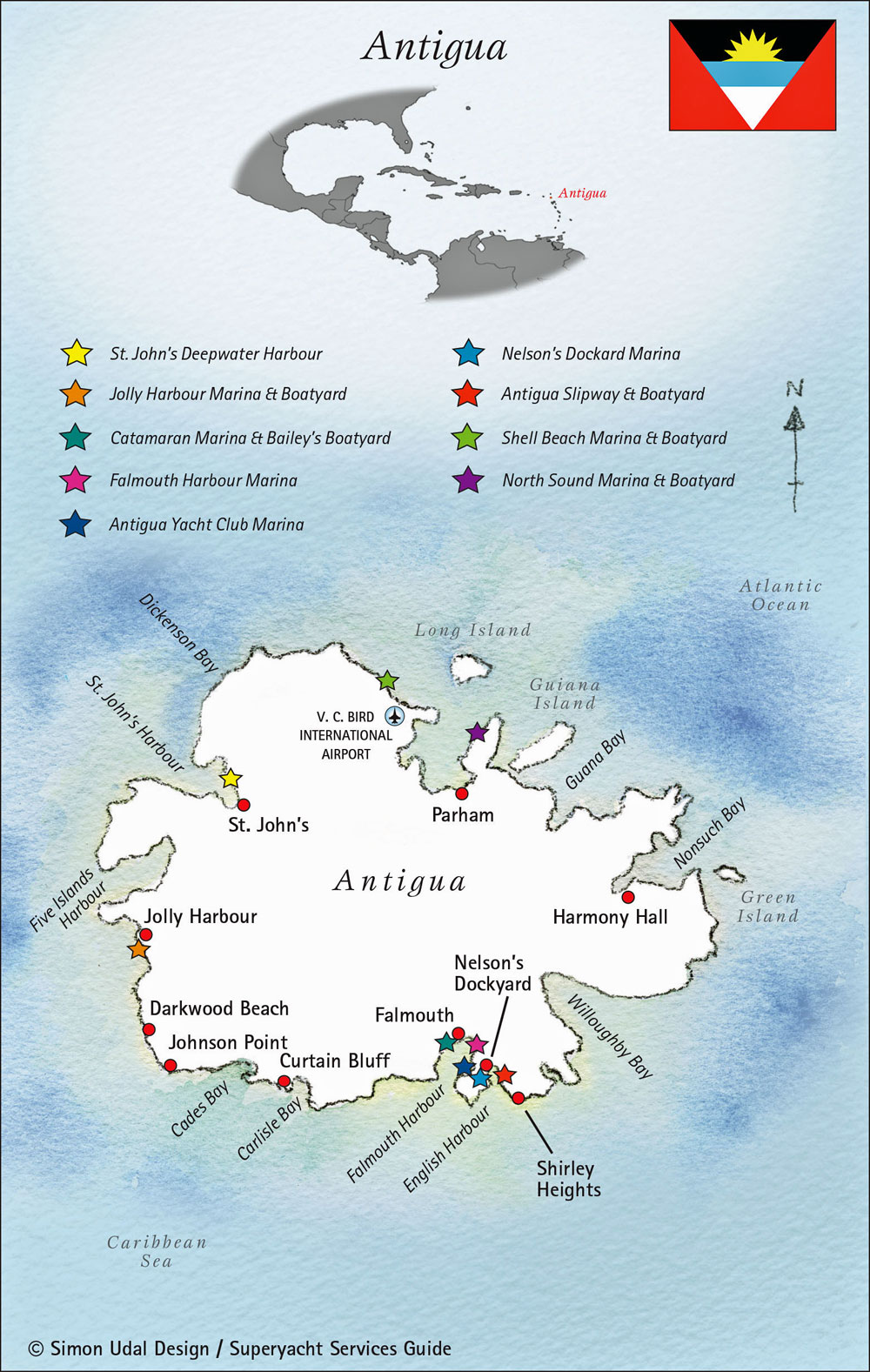 Unlikely I know, but if you were restricted to cruising around just one of these islands, then Antigua would be the one to choose.

Antigua has more anchorages than any other in this island chain, some of which will offer total peace and tranquility whilst others such as English harbour and Falmouth Harbour will be crowded with much going on ashore.

There are several locations where you can haul out your boat for the hurricane season, with facilities which will meet the requirements of most yacht insurance companies. 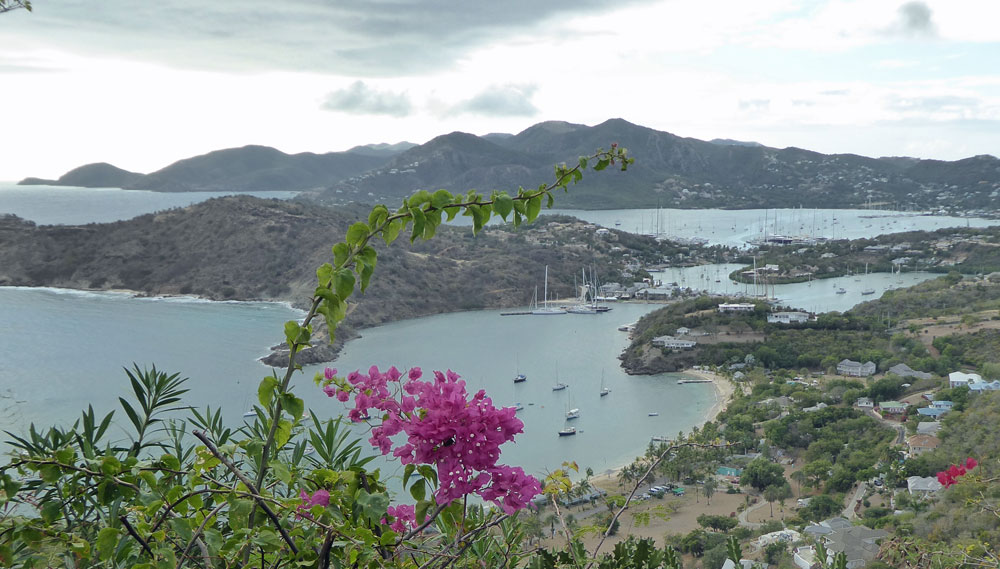 Looking over Freeman Bay to English Harbour and Nelson's Dockyard, with Falmouth Harbour in the distance

On entering Falmouth Harbour, you'll find the Pigeon Beach anchorage on your starboard side 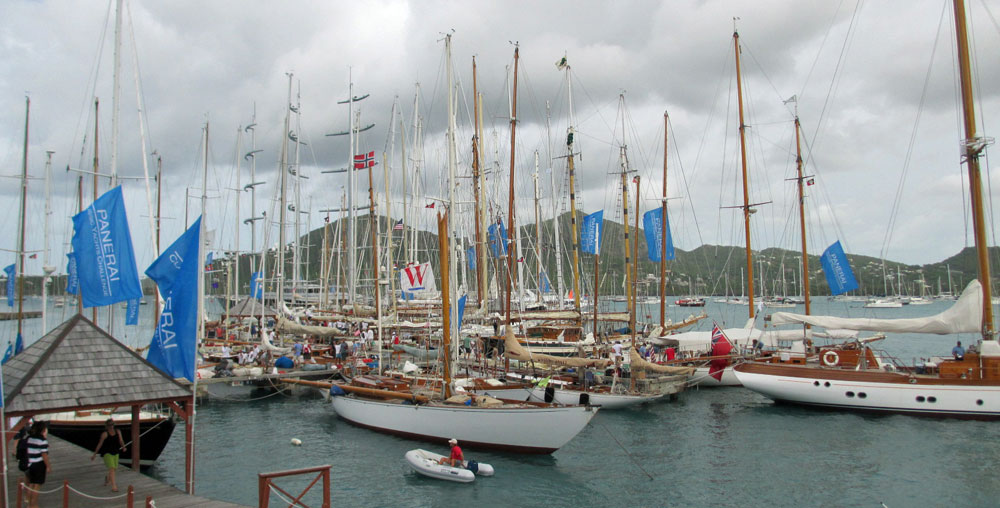 An abundance of sheltered anchorages in North Sound 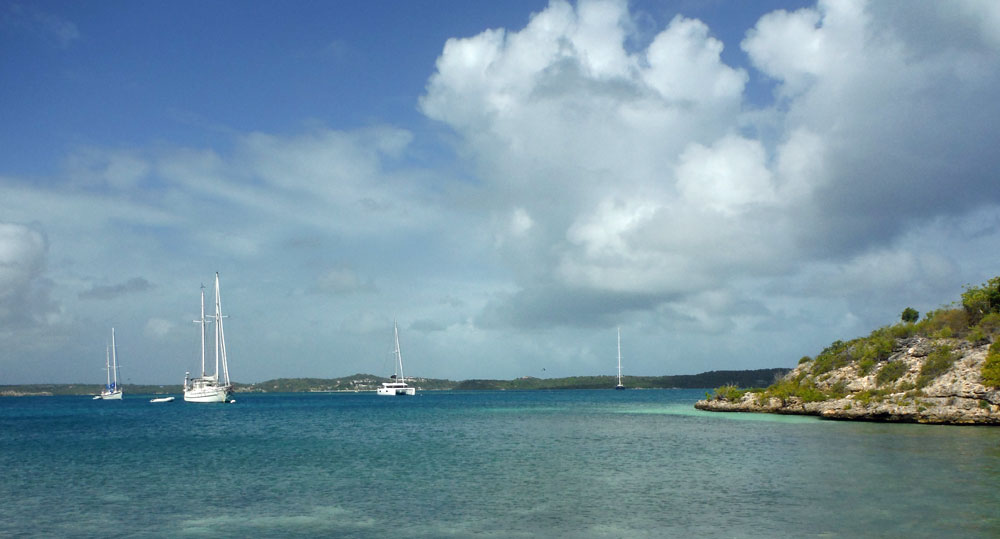 Peace and tranquility on the north side of Five Islands Bay 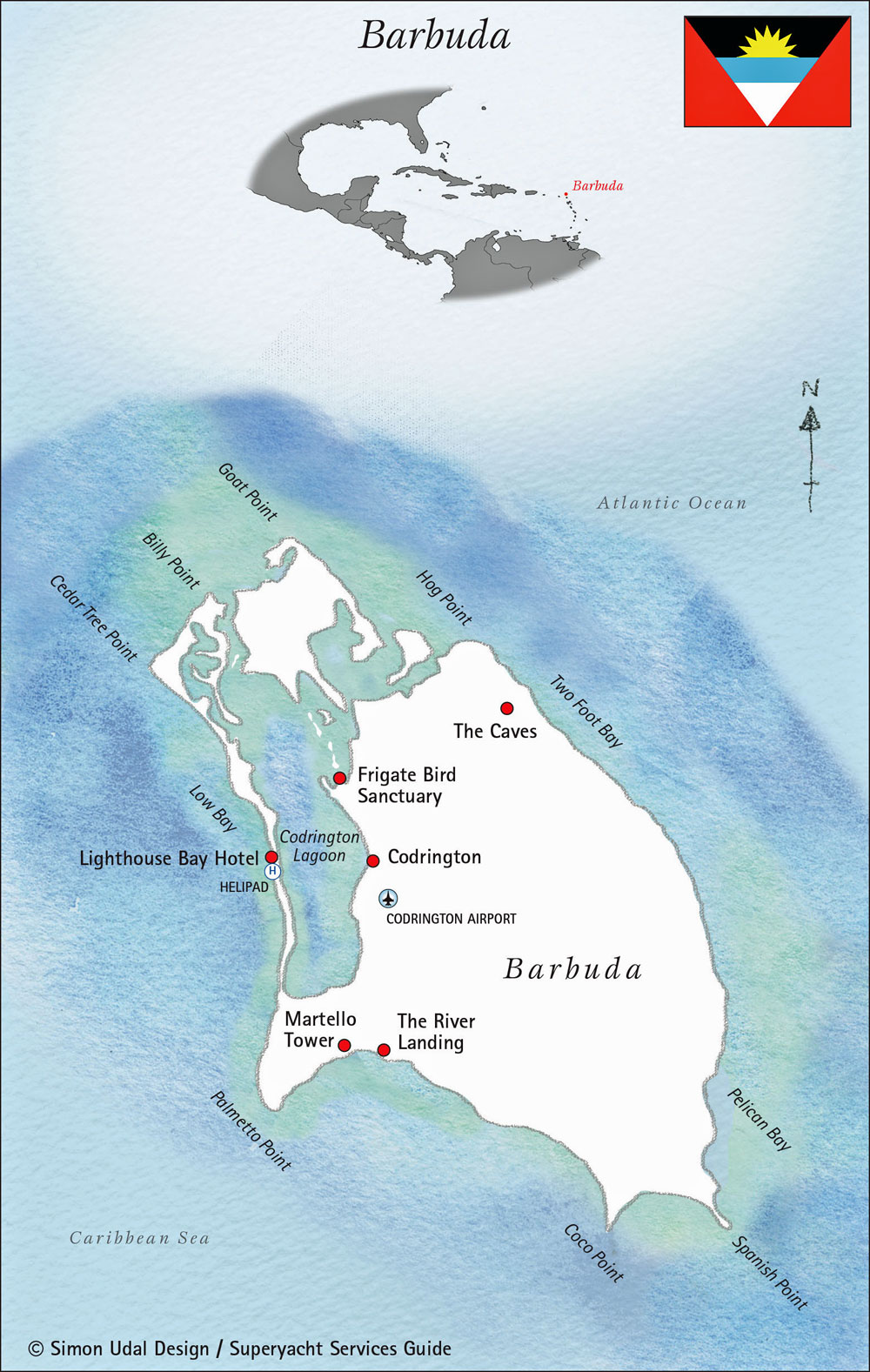 Sadly, Barbuda was hit by hurricane Irma in 2017, when 180mph winds damaged almost every structure on the island, flattening many of them.

The long white sand beach (11 miles of it) was breached by the hurricane allowing dinghy access into the lagoon, where you can visit the once-charming town of Codrington or the world-famous frigate bird colony at the north end of Codrington Lagoon.

Prior to the breach you had to haul your dinghy over the sand spit into the lagoon, or call a water taxi on VHF. Every cloud...

Most cruisers anchor off the 11 mile beach north of Palmetto Point, the Old Boat Harbour near the Martello Tower or in one of the distinctly reefy spots between Cocoa Point and Spanish Point. 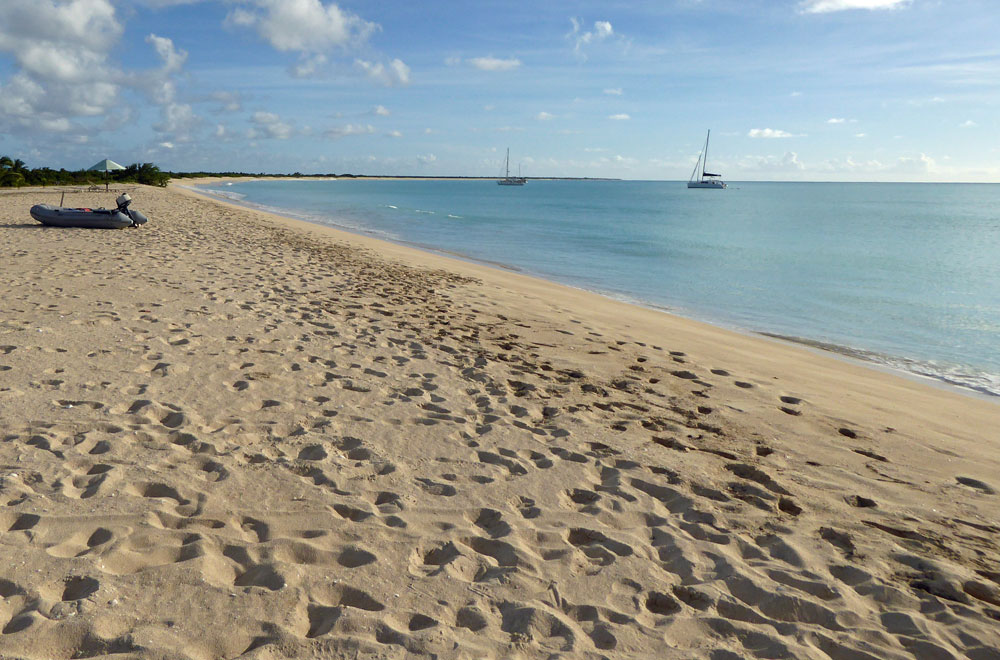 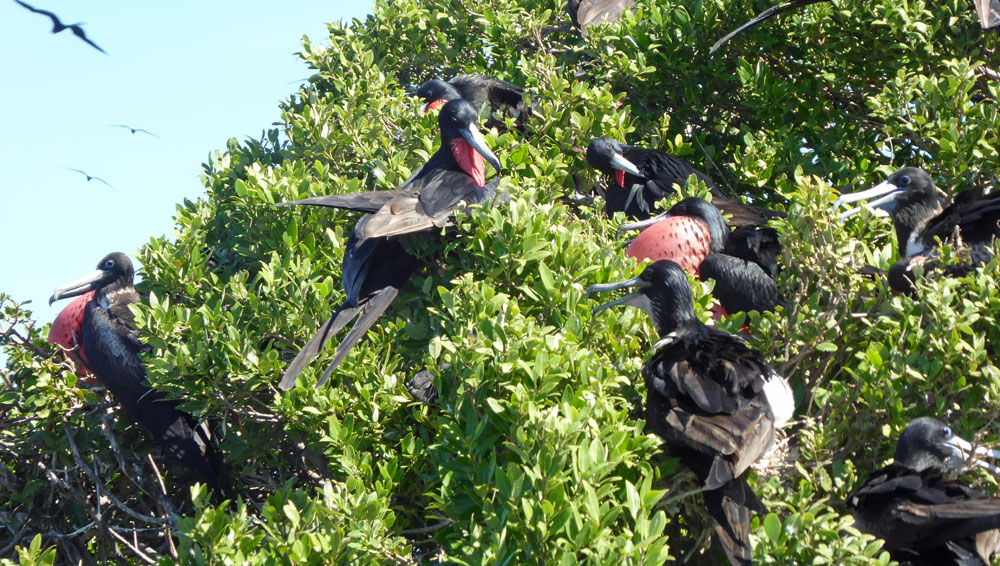 Guadeloupe is an archipelago and overseas department of France. It consists of four main island regions: 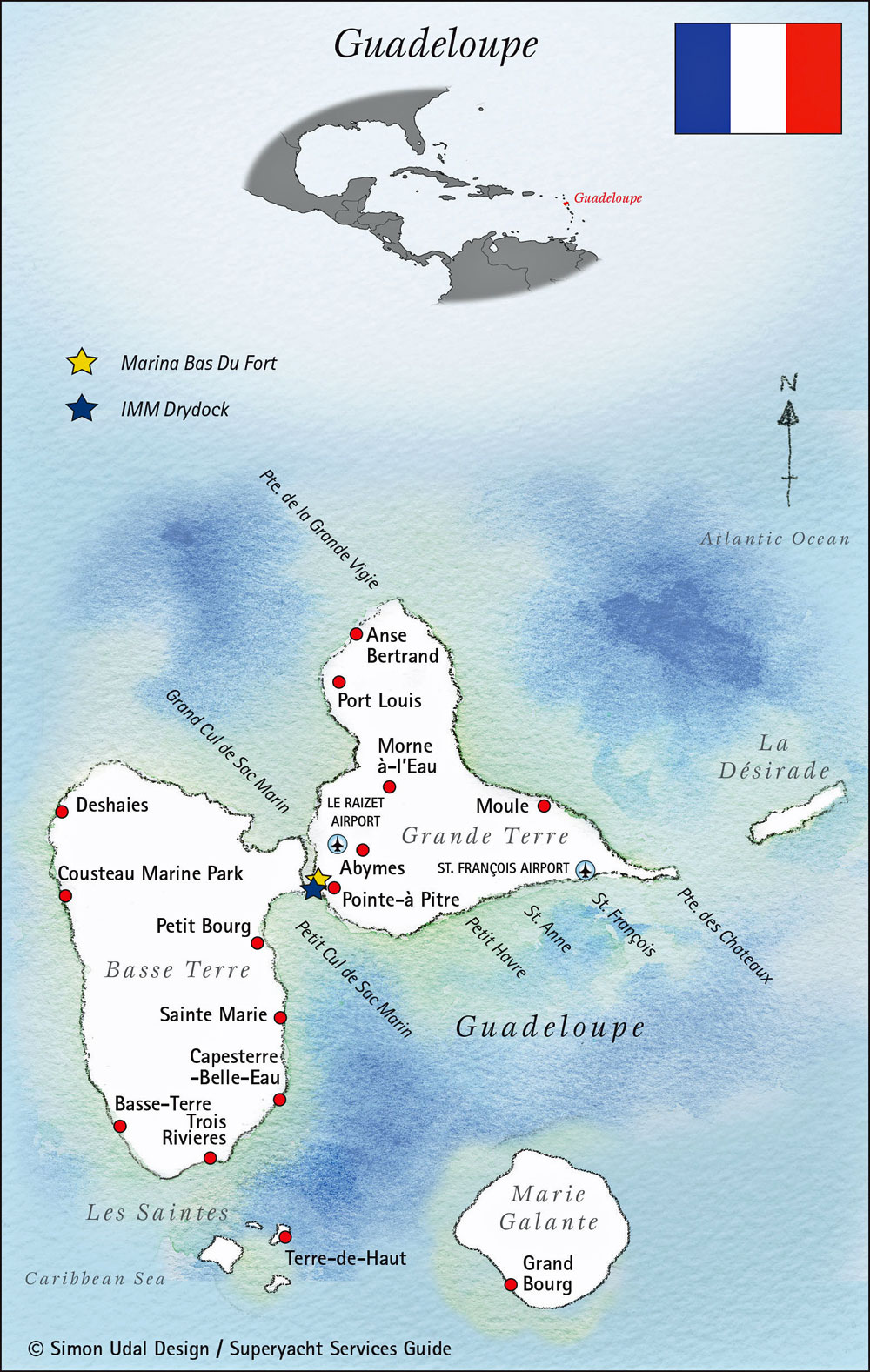 Deshaies, a picturesque fishing village, is the northernmost anchorage on the east side of Guadeloupe.

Most of the moorings are taken by local boats, but you can normally find a spot to drop the hook somewhere.

Pigeon Island is the next anchorage to the south, where the Cousteau Marine Park is a favourite spot for snorkellers and scuba divers.

Two further anchorages are Anse de la Barque and Marina Riviere Sens which is around a mile south of Basse-Terre.

Les Saintes are a delightful group of islands, where the main anchorage is off Bourge de Saintes on Terre d'en Haut. If you'd prefer a mooring - and many skippers do as these waters are deep and anchoring opportunities limited - you need to arrive early!

It would be a shame not to visit Marie Galante, but it if you set off from Les Saintes it will be hard on the wind. In north-easterlies it is a much easier sail from Pointe-a-Pitre. 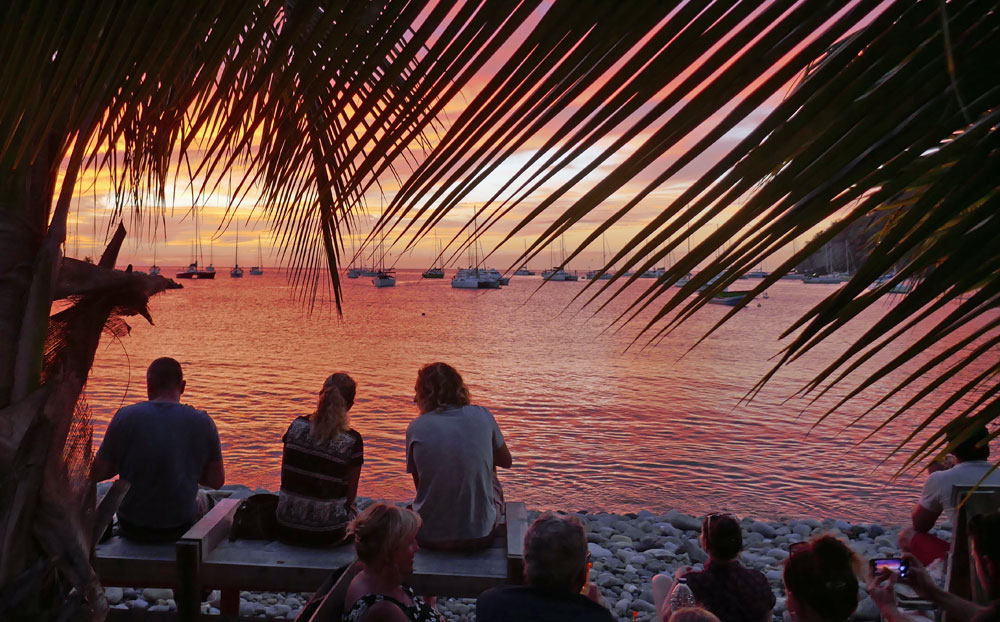 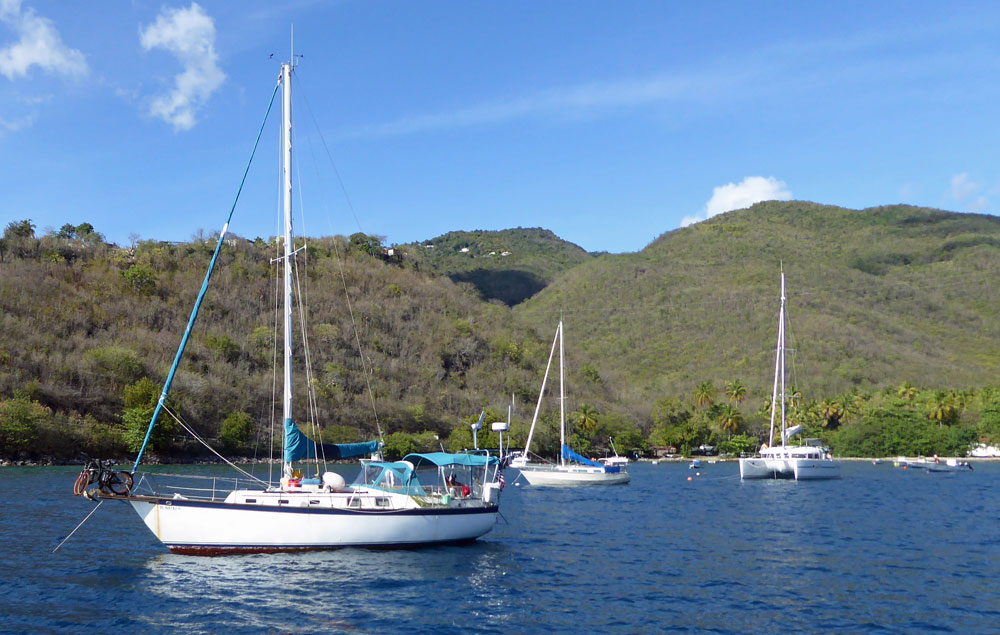 The Ilet du Gosier anchorage, which is close to Pointe-a-Pitre 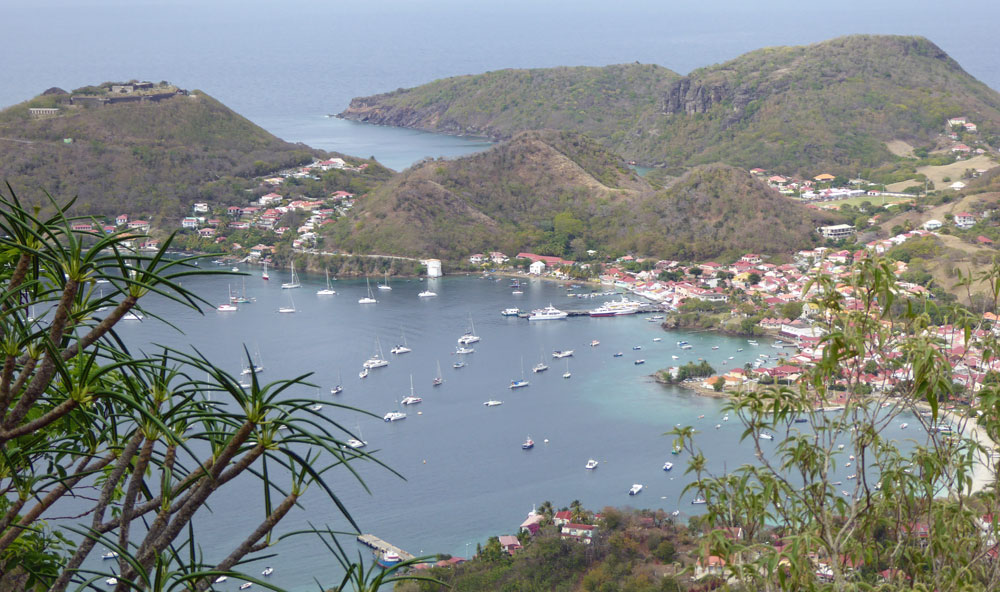 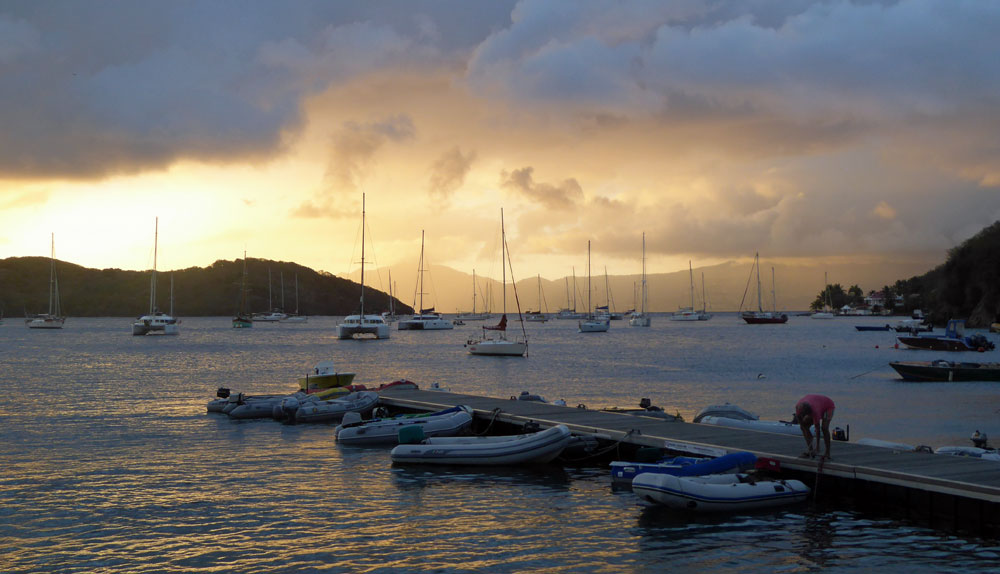 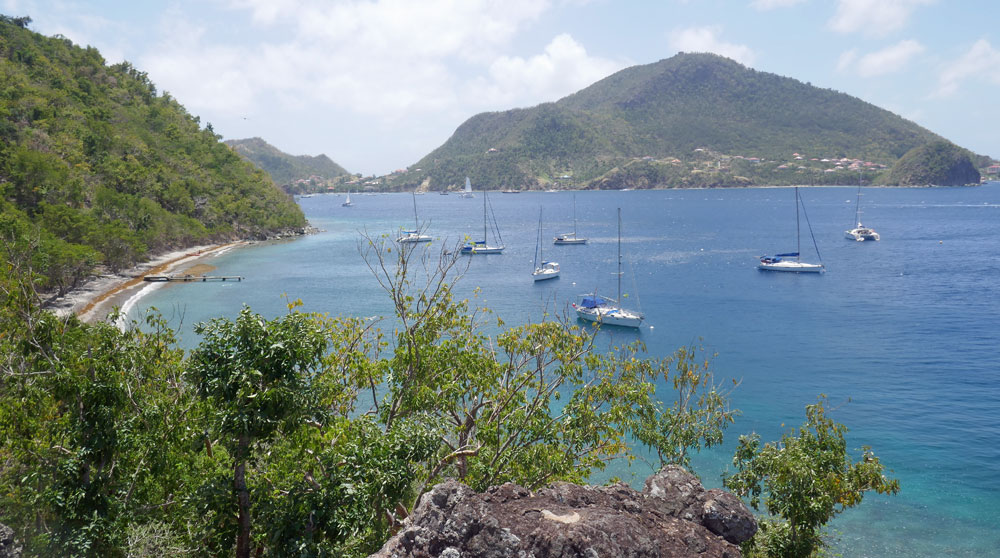 The Anse Fideling anchorage on Terre D'en Bas, with Terre D'en Haut in the background

Some 20 nautical miles south of Les Saintes lies the delightful island of Dominica - the Nature Island - which is at the southern end of the Leeward Islands. Coming from the north, your first port of call will be Portsmouth in Prince Rupert Bay. 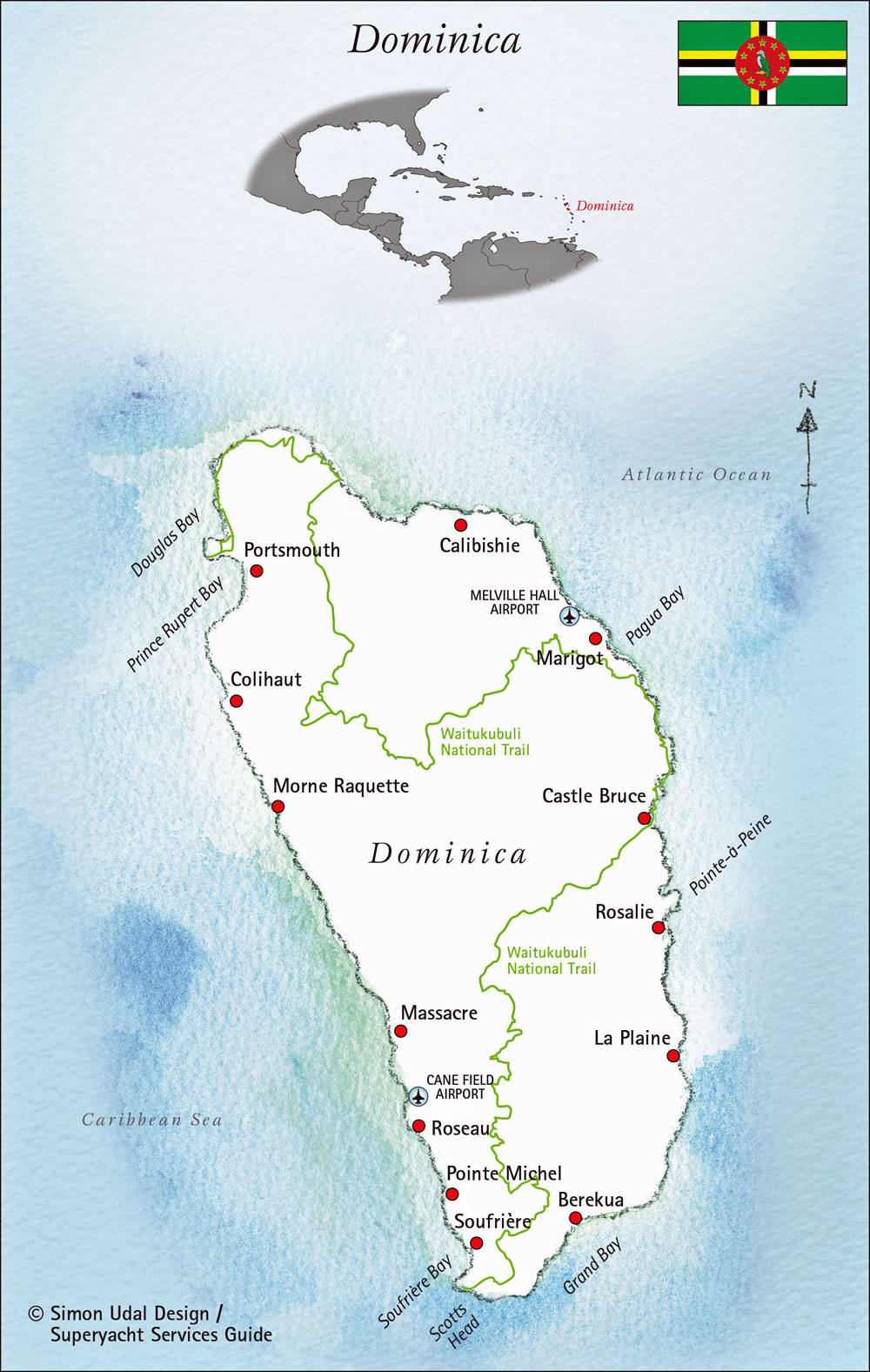 Port of Entry: Portsmouth and Roseau

Rounding the headland you will, in all likelihood, be approached by a local boatman - "Hi Skip, welcome to Dominica!" - who will find you a mooring or a place to anchor, and will be on hand to assist you with anything else during your stay in this charming bay.

He will almost certainly suggest you take an island tour - and without any doubt, you should take him up on it!

Heading south you'll find the next anchorage at Salisbury, followed shortly afterwards by another, off Mero, where you'll see the ruins of the Castaways Beach Hotel. 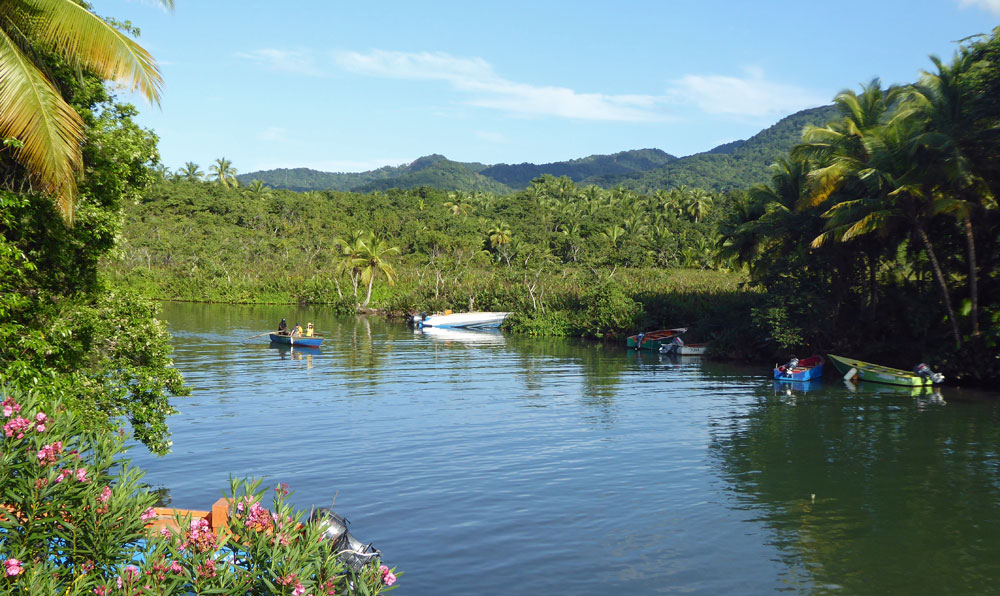 A quiet boat trip (no outboard) up the Indian River is a must!

Roseau is the capital of Dominica and it's from here you will leave this special island, as you depart the Leeward Islands.

So now it's south to Martinique - the first of the Windward Islands...