Engine starter batteries need to provide a lot of 'oomph' for a very short time. Once the starter motor has done its job and the engine fires up, the alternator very quickly replaces the flood of amps drawn from the battery.

But if the engine doesn't start, and desperation with the starter button sets in, then the battery will very quickly be drained of its precious amps.

A deep cycle marine battery operates rather differently. Instead of providing a great surge of power over a short space of time, these types eke out their power more conservatively over a longer period of time and are thus the way to go for providing the sustained loads of our 12v domestic systems.

Which type it is - deep cycle marine battery or starting battery - depends on the way it's been constructed...

Batteries operate on the principle that a voltage develops across two electrodes of dissimilar metals when they are immersed in an electrolyte. A 12 volt battery is made up of six individual cells connected in series within an outer plastic casing, the voltage generated in each cell being 2.1 volts.

Each cell is flooded with a sulphuric acid electrolyte and contains a number of electrically positive and negative plates - the dissimilar metals - the +ve plate being lead dioxide and the -ve, lead.

And it's the disposition of these vertical plates that distinguish a deep cycle marine battery cell from an engine starting battery cell... 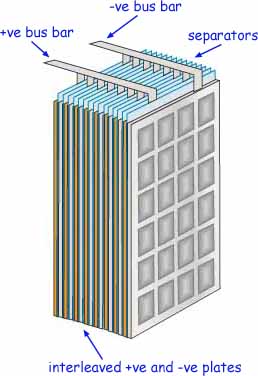 Internals of an engine starter battery

This type of battery has a relatively large number of thin plates presenting a maximum surface area to the electrolyte, which enables them to release a high current to our boat engine's starter motor.

If a battery of this type is repeatedly discharged to about 50% of its capacity (12.2V) - say by the sustained loads of our boat's domestic system - then it will very soon die and refuse any kind of resuscitation.

Which is why we need a deep cycle marine battery (or several of them linked in parallel) to cater for the demands of the domestic system. 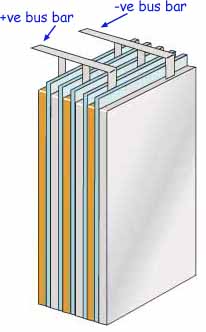 Internals of a deep-cycle marine battery

Instead of the multiple thin plates of the starter battery, those of the deep cycle marine battery are thicker and there are fewer of them.

They're altogether more robust, and won't buckle and fail anything like so readily.

Now there's much less surface area to react with the electrolyte, so current release will be slower - ideal for the steady draw of our boats' domestic system.

The downside is that they're incapable of providing the quick surge of power required to spin over a high compression diesel engine effectively.

As a result they're a firm favourite of owners of small boats with space for just a single battery, or where electrical demands are modest.

The three varieties of marine batteries described above are known as Flooded Cell or Liquid Lead-Acid Batteries. Not being sealed, flooded cell batteries lose water from the electrolyte due to evaporation and will need the occasional top-up.

You must always use distilled or de-ionized water for this. Don't be tempted to use tap water as it contains minerals and other impurities which may pollute and damage the cells.

The gas given off is a mixture of oxygen and hydrogen - mainly the latter - so there's always a theoretical risk of explosion if a naked flame or spark occurs. But both gases being lighter than air, a vented battery box will see them rapidly and harmlessly assimilated into the atmosphere.

One more thing - if the electrolyte (sulphuric acid) comes into contact with seawater, chlorine gas is produced, which is most definitely not what you want.

But there are other types...

Standard flooded cell liquid lead-acid batteries have their electrolyte sloshing around in a vented container. Unless kept close to upright these types can leak - which is less than ideal if your boat if your boat is leaping around a bit, or worse, gets knocked down.

On the downside, rather more care is needed than when charging a deep cycle marine battery.

But the two types of batteries described here won't leak, even if inverted or the outer casing is broken...

Unlike a normal lead acid battery, gel marine batteries use a thixotropic gel to immobilize the electrolyte. These VRLA batteries have some significant benefits over flooded batteries...

AGM (Absorbed Glass Mat) Marine Batteries are the latest step in the development of sealed batteries, and they're the ones for me. They can do everything a Gel marine battery can, only more so.

Strictly speaking, AGM batteries are of the liquid lead acid type but, as their name suggests, the electrolyte is held by capillary action in a fine fibrous glass mat so doesn't slosh about. As with the gel cell type, they can be mounted anyway up and won't leak if the casing is breached.

Thanks to their low internal resistance, AGM batteries will accept high charging currents - meaning they can be charged very rapidly, though it's recommended that voltages be capped at 14.4V.

This characteristic makes them ideal for use with solar panels and windchargers and also allows them to release power quickly, making them suitable for engine starting.

Smaller AGMs are made specifically for that purpose. On Alacazam we've installed a Redflash 750, just 169mm long x 179mm wide x 147mm which spins my Yanmar 30 over very nicely.

All AGMs are comparatively expensive batteries but, if treated properly, they offer many advantages and have a long service life. Because of this, they could even be more economical in the long run.

So is an AGM battery the best marine battery type? Yes, probably...