Feeling a sailboat heel under him for the first time, a novice sailor may wonder what stops it from going all the way over. The righting moment is, of course, the reason why it doesn't.

Many years ago my son James asked me just that.

"It's that lump of lead in the keel" I explained.

"Why put lead in something you expect to float?" said James.

Hmm, perhaps he was onto something - I put him down as a future multihull man...

This piece of nostalgia hints at the two key ingredients to stability - ballast and hull form.

And stability considerations fall under two further headings - static and dynamic. Static being when the boat is at rest; dynamic when underway and subject to the forces of wind and waves. 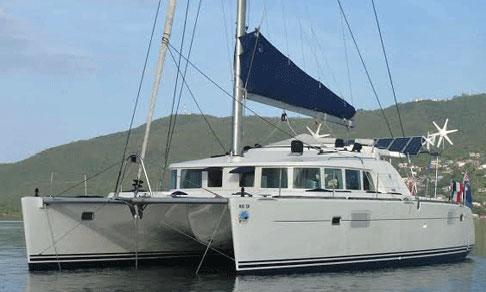 Take a look at the sketches below:~

With the boat upright, the Centre of Gravity (G) is in line with the Centre of Buoyancy (B); effectively there is no righting moment.

But as the boat heels, a righting moment develops. The Moment Arm (Z) is the horizontal distance between G and B, and the Righting Moment Gz is the product of the moment arm and the boat's displacement.

But whilst the boat's displacement and the location of its Centre of Gravity remain constant, Z changes as the boat heals more and more. There comes a point at which Z reaches a maximum value, normally at an angle of heel of around 60 degrees or so. As the boat heels past this point it decreases, leading eventually to a capsize.

The relationship between heeling angle and righting moment is different for all boats, and the plotted Gz curve gives an excellent indicator of the boat's static stability.

But the boat's static stability and its righting moment is only part of the story. How will it react to a sudden gust of wind or when clobbered by a large wave?

There's no arguing that heavy displacement helps a boat's stability, but the most important factor affecting dynamic stability is its moment of inertia. This is the measure of the boat's resistance to angular acceleration. 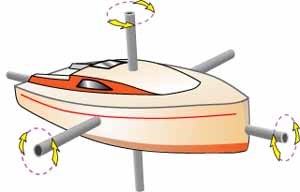 The three axes of rotation

Boats rotate around three axes - rolling around the fore and aft axis; pitching about the transverse axis; yawing around the vertical axis.

It's the Roll Moment of Inertia (RMoI) that should concern us most as it's around the fore and aft axis that a boat is most likely to capsize.

So boats with their ballast deep in their keels, their fuel and water tanks as far outboard as possible, and long heavy masts will have greater RMoI's and will be more dynamically stable as a result. Such boats will have long roll periods and will be highly resistant to rapid changes in heel angle.

This will be very apparent to a crew unfortunate enough to have lost their rig, as this item is the boat's greatest contributor to the moment of inertia. Without it, the boat's roll period will be very quick and snappy, and the probability of capsize much higher.

Makers of grandfather clocks had cause to be grateful for the effects of the rotational moment of inertia. They used it to govern the rate of gain, or loss, of their creations.

To correct a 'slow' clock, the pendulum would be shortened slightly thereby reducing the distance to the neutral axis. This decreased the period of oscillation - it would swing faster - and speed up the clock's mechanism. Conversely, for a clock that gained, the pendulum would be increased in length to create the opposite effect.

The principal reason for using pendulums in clocks was that for a given length, the period of oscillation remains constant, irrespective of the amplitude.

And so it is with a boat; if she's rolling gently at anchor, or from gunwale to gunwale in a seaway, the roll period will be the same.

So clearly there's a lot more to a sailboat's stability than the Righting Moment alone.