Is A Small Boat Radar Setup Worth Having?

It was only a few years ago that I fitted a small boat radar system on my boat, Alacazam. A silly omission really, as I was at that time making regular trips across the English Channel, one of the world's busiest shipping lanes.

It wasn't just the cost - although that did come into it - but the thought of all the battery juice that the system would suck up.

But in the process of designing a new gantry for her stern, it seemed wise to build in the facility for one in the future, along with the stern light, solar panels, windcharger, wifi enhancer, GPS and NAVTEX antennas.

It wasn't long before the future caught up with me, and a radar scanner appeared in its allotted space.

Radio Detection And Ranging (RADAR) is used at sea detect the presence of objects ('targets') at a distance, and to detect their speed if they are moving. It works by transmitting radio pulses, then detecting the echoes of these pulses from objects within the range of the pulse, and displaying them graphically as targets on the display.

The radar range is restricted by curvature of the earth

Its primary function a small boat radar system is as an aid to avoiding collision, but here's what else the display can do.... 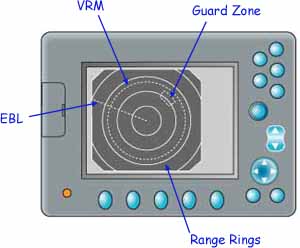 There are  two types of scanners:~

Typically, Radomes will be either 18" or 24" across, inside of which will be a 4kW transmitter giving the radar the capability to detect targets out to a maximum range of 48 nautical miles.

Coupled to a compatible multi-function display unit, the radar screen can be viewed independently or overlaid on the chart plotter screen.

On a sailboat, the scanner would normally be mounted either on the mast at a height of around 15 feet above the deck.

With the boat boat heeled, the range of the scanner - particularly on the leeward side - will be adversely affected.

However, a self-leveling mast mount like the one shown below will ensure that the unit's performance remains unaffected by the angle of heel.

An Unexpected Benefit of a Small Boat Radar System

As a result of fitting a radar set, midway across the heavily trafficked English Channel with visibility closing in weren't quite as buttock clenching as they had been previously.

But far offshore and away from shipping lanes, you could be forgiven for thinking that small boat radar is largely superfluous.

Not so. It was on an Atlantic crossing we discovered that during the hours of darkness, the radar will detect approaching squalls from long range (providing they have rain in them), often giving you time to adjust our course to avoid them completely - or, at worst, to just suffer a glancing blow.

Next: Small Boat Radar or AIS?